As a general rule, I've never really warmed to rotoscope animation. This technique of transposing animated figures over actual, filmed people has a somewhat distancing, disorienting effect, as in the drug-induced haze of Richard Linklater's A Scanner Darkly. And yet, though I understand its purpose in certain applications, it's never been a style that I've particularly enjoyed watching.

In Tehran Taboo, the first feature film by animator Ali Soozandeh, I didn't feel the disconnect between image and theme that I have so often detected in rotoscoped films. In fact, it seems to be an integral part of the film's thematic core. The film is a collection of interconnecting stories set in the Iranian capital of Tehran, each representing the sexual hypocrisy of the repressive nation's patriarchal, theocratic society. A prostitute pleasures a man in a car who soon becomes enraged when he sees his daughter holding hands with a man in public. A young man desperately tries to procure a procedure to restore the hymen of a one night stand so she can still be a virgin for her violent fiancé.  A woman whose husband is in prison cannot get a job without her husband's written permission. Another woman is threatened with execution for having a secret abortion. And yet men can procure sex whenever they want, while punishing women for the same thing. 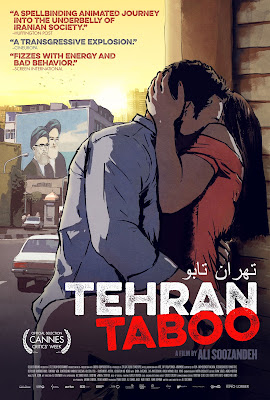 The characters may be fictional, but the rotoscoping seems as if it is somehow protecting the innocent, hiding the identities of the people it  represents under an animated veneer. Its subjects are trapped in a an animated nightmare that vaguely resembles reality, yet feels somehow off, as if it is always one step removed from the real world. It is a world controlled by archaic sexual mores dictated by a patriarchal regime that dehumanizes women. In this world, women are mere objects, paintings to be kept and hung upon a wall. The film’s style reflects that distance between physical human reality and Iranian society’s strange objectification of femininity as something both deeply desirable and yet untouchable, a commodity to be owned, bought, or sold by men.

Soozandeh makes striking use of the color red as a kind of scarlet letter for the women trapped by the libidos of men, who wag their finger with one hand and force women to pleasure them with the other. Tehran Taboo has no patience with this kind of patriarchal hypocrisy, and turns a withering eye on those who would impose their restrictive religious convictions on others when they cannot follow them themselves. These double standards resonate beyond Iranian society, and the resulting film is somehow both rebellious and heartfelt, angry and mournful at the same time. It brazenly deconstructs the patriarchy while offering a forceful condemnation of sexual duplicity.

And lest we arrogantly assume this is only an Iranian or Islamic problem, Tehran Taboo reminds us that it is not, it's a universal abuse of privilege that must be snuffed out. In a world where women often pay for the mistakes of men who are unable to obey their own oppressive rules, no one can be truly free, subjugated under an impossible standard that both idealizes and robs women of their agency. And as observed through the eyes of the mute young son of a prostitute, the cycle seems doomed to continue, normalized through the "will of God." Under Soozandeh's knowing and fiery direction, Tehran Taboo becomes an intriguing and often exhilarating work, challenging social conventions and acknowledging their often devastating human toll.