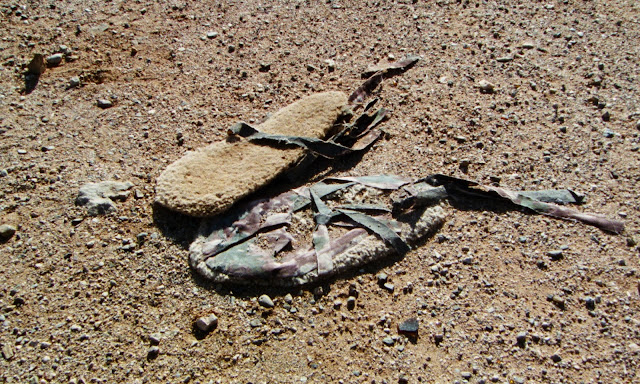 Set in the mysterious and lonely Sonoran Desert, J.P. Sniadecki and Joshua Bonnetta's El Mar La Mar, the latest documentary from Harvard's Sensory Ethnography Lab, is a bracing and immersive look at the unforgiving landscape over which Mexican immigrants must cross to reach the United States. The Sensory Ethnography Lab is responsible for some of the most powerful experimental documentaries of the last decade, releasing films like Sweetgrass, Leviathan, and Manakamana that boldly push the boundaries of the medium. El Mar La Mar is no different, eschewing talking heads and traditional interviews to weave an impressionistic vision of the desert through its local folklore and harrowing tales of human suffering. 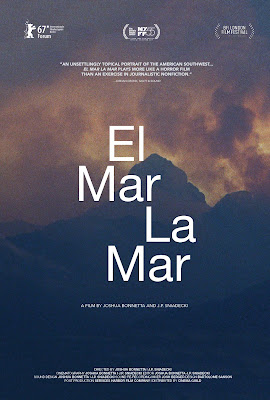 Discarded clothes and other personal items, faded and overgrown with plant life, dot the landscape and serve as grim reminders of the men and women who have attempted to make the perilous journey, many of whom never made it to their destination. Here, the Sonoran Desert is like a graveyard of the American dream, home to the bodies of untold numbers who set out across it in search of a better life. Sniadecki and Bonnetta's camera lingers over these objects, the 16mm images like ghosts reaching through the screen. The voices of locals tell their stories, eerie legends of 15 foot tall monsters said to roam the desert, wrenching tales of the dead and dying, of the nonchalance of border patrol agents, of the goodness of strangers who leave water in stations across the sand.

El Mar La Mar (which translates to The Sea, The Sea...) plays out like a horror film, its grainy cinematography hauntingly capturing the sun slowly disappearing behind the mountains, while bats swirl around in caves and flashlights play over the dry desert underbrush. Sniadecki and Bonnetta, working as a two-man team, conjure an atmosphere of loneliness and desolation. We truly feel the isolation of the desert, its craggy peaks and endless horizon beyond a sea of sand becoming a metaphor for the hardships of achieving the promise of freedom on the other side.

The film's greatest tragedy is that we know what awaits them across that desert - more economic hardship, prejudice, abuse, mistrust, a growing xenophobia that punishes those seeking the American dream, much like our own Anglo-American ancestors did so many years ago. Sniadecki and Bonnetta don't say that in so many words, but its truth hangs heavy over the film. You can almost hear the jeering chants of "build the wall" echoing in the distance. Yet for all the rhetoric we hear about illegal immigration, we rarely hear about the plight these immigrants face, and the dangers they are willing to tackle in order to have a fighting chance at a better life.

El Mar La Mar seeks to recreate that experience, and the results are something truly harrowing. Sniadecki and Bonnetta push the documentary form to its limits, creating a starkly beautiful and terrifying experience that brilliantly captures the dichotomy of the desert landscape - its lovely vistas juxtaposed against the lingering stench of death in their shadows. The images of lost shoes, discarded shirts, and perhaps most hauntingly, a single pair of glasses, persist in the mind; ghostly reminders of the human toll of the pursuit of a freedom so many of us take for granted. At once a meditation on mortality, a requiem for the lost, and a chilling tone poem, El Mar La Mar is a singular and terrifying evocation of shattered dreams and human longing that marks another breathtaking triumph for one of the most unique documentary projects in the world.


EL MAR LA MAR | Directed by J.P. Sniadecki and Joshua Bonnetta | Not Rated | Now playing at the Museum of Modern Art in NYC.