Jeff VanderMeer's "Annihilation," the first book in his "Southern Reach Trilogy," is arguably one of the most profound works of literary science fiction of the last 20 years. It's a mesmerizing, almost abstract tale of five women who venture into a mysterious region known as Area X, which has become enveloped in a strange, shimmering barrier from which no one has returned.

Rather that creating a strict adaptation of VanderMeer's challenging novel, director Alex Garland (Ex Machina) instead uses it as a jumping-off point to create his own story with its own unique aims. There's plenty of overlap, but Garland isn't content with merely adapting the book, he wants to forge his own path. 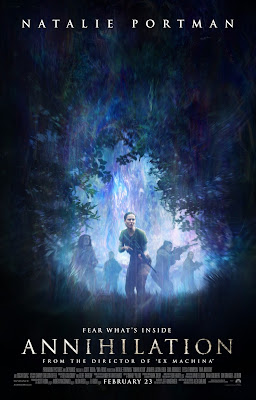 In the film version of Annihilation, Natalie Portman stars as Lena, a biologist whose husband (Oscar Isaac) went on a covert mission for the military and never returned. A year later, however, he comes back somehow...different. Upon further investigation, she discovers that he is the only person to have come back from the top secret Area X, an ever expanding barrier radiating from the site of a meteor crash. With her husband near death, Lena volunteers to join the latest team heading into "The Shimmer" to discover the truth about its origins. Along the way, they encounter strange hybrid creatures, and a creeping sense of madness. Something isn't quite right inside Area X, and soon they discover the dark truth about the previous expedition, and begin to consider that perhaps they are doomed to suffer the same grisly fate.

Annihilation asks a lot of questions, then doggedly refuses to answer any of them. There's something quite admirable about the way it builds its world of mystery, building toward a conclusion that neither resolves its story or offers any answers that may explain what we just saw. Garland expertly builds a sense of dread, setting the audience on edge in a strange and alien world without the comfort of a traditional narrative to hang onto. This is not an easy film, nor does it try to be. It uses a truly brilliant score by Geoff Barrow and Ben Salisbury that sounds like melody being refracted through a prism, much as the Shimmer refracts DNA in the film. It's at once beautiful and hostile, moving and terrifying, familiar and alienating, and it feels as if we're watching something on screen that we have truly never seen before.

Garland eschews some of the novel's more abstract elements, but fully embraces them by the film's climax, exploring concepts of human identity through Lena's own struggle to know who she really is. Annihilation takes its cues from Tarkovsky's sci-fi masterpiece, Stalker, and while it never operates on a level that high, its fascinating to see how Garland riffs on Tarkovsky in a more modern, minor key. Stalker was a film about a mysterious contained area as well, and Annihilation conjures some of the same feelings of dread. But Tarkovsky was asking big questions that Garland never really asks. Instead, he creates a beautifully crafted conundrum of a film filled with portent and wonder that isn't necessarily saying anything profound, but is nonetheless fascinating to contemplate.

Modern science-fiction is rarely brave enough to put so much of the work in the hands of its audience. Yet Annihilation acts as a kind of cinematic Rorschach blot, open to interpretation with many different equally intriguing possibilities to contemplate. What, exactly, happened in Area X? What is the shimmer, and what is the mysterious being they discover at its center? Garland never tells; rather than offer pat answers that would likely not be nearly as satisfying as what we conjure in our mind, he instead allows us to draw our own conclusions. It doesn't always work, but what makes Annihilation such a daring work is that it is a major studio release that doesn't feel like it needs to hold its audience's hand. Instead, it takes us into a whole new world and abandons us to our own devices, making for a cinematic experience that is as compelling as it is frustrating.