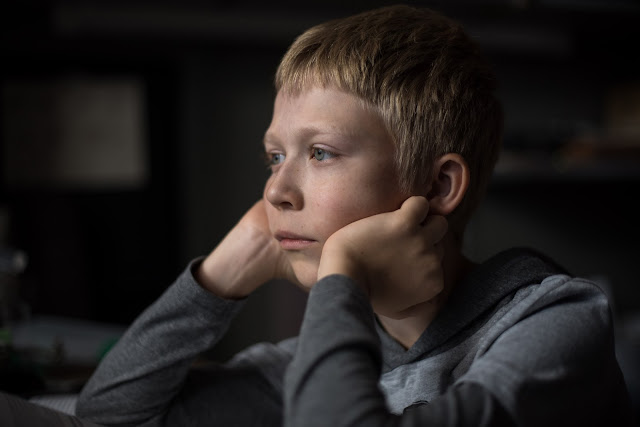 The chilly gray landscape of Russia in winter provides the appropriate backdrop for Andrey Zvyagintsev's Loveless, a bleak and often bitter excoriation of human nature in a world where love has died an extended and painful death. If Zvyagintsev's Leviathan (2014) was a cry of despair for the human condition, then Loveless is a howl of defeat. How can one continue to exist in a world of supreme selfishness, wholly unconcerned with the wellbeing of others?

The story is framed through the lens of a couple going through a hostile divorce. In the process of selling their home and starting new lives with new lovers, Zhenya (Maryana Spivak) and Boris (Aleksey Rozin) all but neglect their sullen 12-year-old son, Alyosha (Matvey Novikov). Faced with their hatred for each other and their desire to move on, they consider shipping Alyosha off to boarding school, one more piece of collateral damage in their ugly breakup. But when Alyosha suddenly disappears, they are forced to work together in order to find him, but they soon discover that they may not want to find him at all. 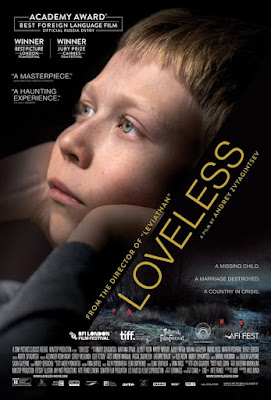 Zhenya has always resented Alyosha, because he was the product of a loveless marriage that she never intended to have. Boris did not allow her to get an abortion because of his Orthodox employer, who would fire anyone who did not adhere to his strict code of morality. So she was saddled with this child for 12 years, growing to hate him just as much as his father. Boris was more ambivalent, seeking only to move on to the next family without any baggage to carry with him. Alyosha is alone, unloved, with only one actual friend outside his social media connections, lost in a world full of people who have no time for anyone other than themselves.

Zvyagintsev turns a withering eye not just on his home country of Russia, but on a world at large that is so self obsessed that they inflict collateral damage on everyone around them. Zhenya and Boris spend their time scrolling through endless social media feeds and having passionless sex with their new partners, living new lives that are almost indistinguishable from their old ones. Zvyagintsev brilliantly juxtaposes their respective new families so that we can no longer tell the difference between the lives they currently lead and the ones they left behind. What was the point of it all? And Alyosha, the innocent bystander, pays the the highest price for the oblivious cruelty of his parents, both of whom have chosen to not only divorce from each other, but from reality itself.

Loveless is a grim, often nihilistic portrait of humanity that offers little hope for our redemption. Zvyagintsev's haunting mise-en-scène is simply incredible, constantly turning even the most intimate spaces into gargantuan caverns that dwarf these terribly small, petty, cruel people. His austere style gives an air hopelessness that is at once oppressive and gut-wrenching, resulting in a film that is difficult to watch but also hugely rewarding, calling to mind Fritz Lang's M in its aggressively dark examination of human frailty. It's a painful and powerful work of art that is a damning indictment of society's lack of compassion and connection, shirking both responsibility and kindness for selfish gain that amounts to naught. Loveless is a chilling and somber reminder that a world without love is an ugly place indeed, and a terrifying admonishment that it may be too late to turn back.