You know something's big when I check my email this morning to find multiple emails from multiple publicists all proclaiming the same thing - Pixar's Up has been selected as the opening night premiere of the 2009 Cannes Film Festival. 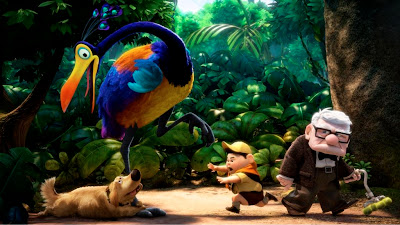 That third one may be the biggest news to some, with 3-D technology really beginning to catch on, especially with big time advocates like James Cameron.

Of course, the technology is lagging behind initial predictions about how widespread it would be by now (a lagging economy may be partially to blame for that). But I'm pretty apathetic about the whole 3-D thing. The reason this news excites me is that it shows Disney has great faith in Up, which is a good sign. I hope this doesn't create any unnecessary hype, because WALL-E is a hard act to follow. But Pixar hasn't disappointed me yet.

Here, once again, is the trailer:

I love the balloons pulling the house through the sky, it remeinded me of course of teh scene in Lamaorisee's THE RED BALLOON, when the boy is whisked up in the aire by the colorful balloons.
7:51 PM

Sam C. Mac said…
Argh.
I knew I should have Cannes'd it the first few days, instead of planning to go for the last five days of the fest.