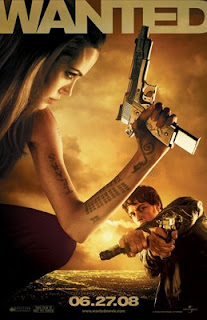 McAvoy stars as Wesley Gibson, a wimpy accountant stuck in a seemingly meaningless existence, with a boring job, a horrible boss, and an unfaithful wife who is cheating on him with his best friend. His life seems to be going nowhere until one day a beautiful assassin named Fox (Angelina Jolie) rescues him from certain death at the hands of the man who killed his father, who as it turns out was a world class assassin himself, a member of a super-secret organization of assassins known as The Fraternity.

Wesley is saddled with the task of tracking down his father's killer who was a member of the fraternity who went rogue and betrayed them, as Fox and the members of the Fraternity train him and help him hone the skills he inherited from his father that he never knew he had.

It is the kind of film where one must totally surrender to it in order to fully enjoy it. It takes place in a world where bullets can be curved and collide in midair, where the blood flows fast and candle wax can heal anything. It is not something that can be thought too much about (the mysterious Loom of Fate could have used more development), but the ultimate product is one of such eye-popping spectacle that it's well worth the ride.

Bekmambetov brings an energy and a verve that keeps the adrenaline pumping and the action coming fast and furious. Wanted is a film that never lets up once it gets going. Through his inventive visual style, Bekmambetov shows he knows just how to thrill an audience by creating some truly jaw-dropping action set pieces.

James McAvoy is an appealing lead, and it's good to see him showing up more often. Jolie is basically playing Jolie, but she's still great fun. 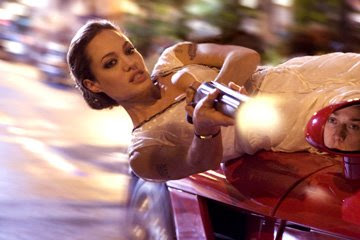 The naysayers are already complaining about the level of extreme violence and vigilante themes, but you can't come into a film like Wanted looking for politics. It is only intent on showing the audience a good time, and it does...in spades. You have to evaluate it on its filmmaking skill, and Bekmambetov has crafted, a mean, taut thriller with a slash and burn, take no prisoners sensibility.

I loved its balls-to-the-wall aesthetic and rebellious spirit. It comes blazing out of the gate flashing the middle finger on both hands, almost daring anyone to hate it. Which is something I don't see how anyone can do. We're not dealing with great filmmaking here (music is a different story though, Danny Elfman's Russian/rock flavored score is one of the best of the year, period), but that's not the point. It's a bold, raucous adrenaline shot, and I left the theater with a big, goofy grin on my face, which is often all I can ask for. Wanted may quite possibly be the best film of its kind since The Matrix.

Anonymous said…
I completely agree with you, as usual!