Some Thoughts on "The Happening"

Yesterday I posted my initial reaction to The Happening, in the form of "M. Night Shyamalan is over." I feel the need to elaborate even though my review will be published next Thursday. 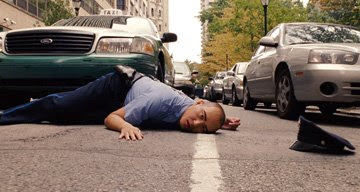 Watching The Happening may be hazardous to your health.

I don't think I've had a theatrical experience this year so wholly repulsive and utterly devoid of anything resembling solid filmmaking integrity outside of Prom Night. The Happening is pandering nonsense at its most disgusting, the product of a director who treats his audiences with the utmost contempt, feeling the need to treat them like children with overwrought, expositional dialogue. In short, it's an ego-trip.

Shyamalan shamelessly crams as much exposition into random lines of dialogue, turning what should be simple statements into laborious explanations of minute, useless details. So, "we're in (town)" becomes "we're in the small community of (town), 90 miles west of (other town.)" I wish I could remember more examples, but I don't know anyone who actually talks like Shyamalan's characters. Everybody talks like a newscaster, and spectacularly ineloquent ones at that. He doesn't trust us enough to simply show us, he has to spell it out as well, as if we were too dumb to fill in the gaps on our own.

Also, the acting is some of the worst I have seen in a production of this magnitude in ages. Seriously, how on earth can Mark Wahlberg and Zooey Deschanel be so breathtakingly bad? Their characterizations are bizarre, and rife with Shyamalan's awkwardly misplaced humor. In fact, it's hard to tell what is supposed to be scary and what's supposed to be funny. Shyamalan is skilled at creating tension, but his writing is, well...seriously lacking.

Much has been made of this being Shyamalan's first R-rated film, but the graphic deaths really serve no purpose and get very repetitive after a while. It reeks of studio interference, as if Shyamalan was trying too hard to to conform to studio demands for an R-rating. 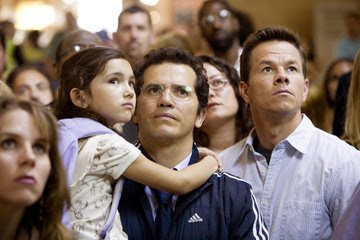 Today's forecast, sucky with a 90% chance of boredom.

The film's only real redeeming feature is James Newton Howard's wonderfully creepy score, featuring Maya Beiser's haunting cello solos. Howard's scores have always been a highlight of Shyamalan's films, and as the films get worse the scores only seem to get better.

*SPOILERS FROM HERE ON OUT*

The film's central premise of the earth striking back against the human threat is an interesting one, but treated very poorly and heavy-handedly, ending with Shyamalan preaching about taking care of the environment. Which is all well and good, but when a director feels the need to state the theme of the movie at the end, then that shows a distinct weakness in the film up until that point.

And just out of curiosity, how does one outrun the wind? They do (at least for a while) in The Happening. It's just all to silly to be either scary or entertaining. It may end up being a great Mystery Science Theater 3000 episode one day, but there's nothing about it remotely entertaining or even diverting enough to be mildly interesting.

I think this is the end of Shyamalan's commercial viability. He needs to step back and reevaluate his technique and the direction of his career. He has boxed himself in by the limitations of his own style, because The Happening is like a bad parody of a Shyamalan film. His mise-en-scene and overall structure hasn't changed at all, unless it is to become more stiff and and unmoving. He has driven the final nail in his career's coffin, because after this and the reaction I saw coming out of the theater, his name is now commercial mud. It's going to be an up hill battle to get himself back in the public graces, and his best course of action may be to change genres and try something new, maybe smaller and more personal.

Personal connection is what is so desperately lacking in this film. It's distant, aloof, and painfully self-aggrandizing. In real life, the plants may not make you want to kill yourself, but The Happening might.
Email Post

Anonymous said…
As I stated on another site, I loved the ending to your review Matthew! I also completely agree with you on James Newton Howard's score. howard seems to do his best work for Shyamalan, ironically enough. For THE VILLAGE, he wrote one of his finest.
Your review is pretty much in agreement with the vast majority of the critics, and I lament this director's inability to overcome his considerable issues, which include wooden dialogue, incohesiveness and bad acting. Still there were enough jolts and shocks within the framework of this "horror" film that made it passable for me. Still "passable" isn't good enough, especially for a director who in the minds of many is fading into oblivion.
By the way, excellent review!!
10:03 AM