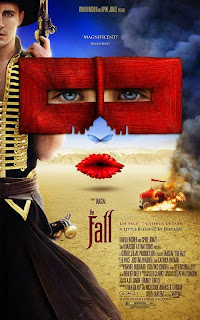 Having now seen Tarsem's The Fall, I'm still not quite sure how to begin my review. Do I start by praising the film's glorious imagery? Do I start by offering comparisons to Pan's Labyrinth in the film's integration of the imagined fantasy at the heart of the story with the real world around the characters? Do I proclaim Tarsem a modern visionary? Do I recount the film's arduous 16 year, 18 country journey to the screen? I'm honestly at a loss, because The Fall is not a film that is easy to categorize or fit in a nice neat box.

It is obviously a labor of love for Tarsem (The Cell), whose passion for bringing the film to life has finally paid off, only to languish on the festival circuit since 2006. With the help of David Fincher and Spike Jonze, Tarsem's vision has finally received the commercial distribution, that while limited, it so richly deserves.

Set in a hospital in 1915, The Fall stars Lee Pace as a silent-era stuntman named Roy, who is recuperating in a hospital after a failed suicide attempt in which he jumped off a bridge because the woman he loved went off with the film's leading man. Depressed and lonely, Roy strikes up an unlikely friendship with a five year old girl named Alexandria (Catinca Untaru), who is recovering from a broken arm incurred during a fall while picking oranges with her family. Still devastated by a broken heart, Roy begins to tell Alexandria an "epic tale of revenge and romance" to try to get her to steal a lethal dose of morphine for him to end his suffering, but as the story intertwines even more with real life, Roy and Alexandria begin to form a bond that not even death can break. 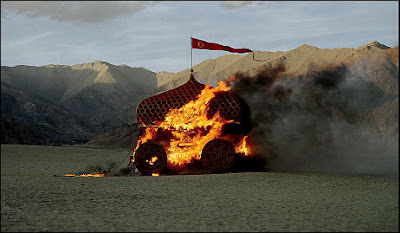 The Fall calls to mind films such as Pan's Labyrinth and The Wizard of Oz in its blending of the fictional fantasy world that Roy creates and the real world. The people that Alexandria sees everyday are the basis for the characters in the story...notice how the Indian that Roy describes is actually a Native American, with his descriptions of wigwams and squaws, but Alexandria, who is from India, imagines an actual Indian instead. It is the details like that that really set The Fall apart. This is no mere fantasy retread, Tarsem has created a world of his own, a vibrant and wholly original bedtime story come to life, filled with heroes, villains, revenge, magic, romance, and betrayal, all filtered through the frame of reference of a 5 year old girl.

Now, lest you think that The Fall is a mere children's fairy tale, this is a dark tale and a unique vision that does not shy away from tragedy or death. As Roy's state becomes more precarious, the story gets darker and more troubled, as the five heroes at its core set out to take their revenge on the evil Governor Odious, who has stolen the love of the Masked Bandit, each one a stand in for a character in Roy's own sad story.

It is this blending of real life and fantasy that makes The Fall so engaging, and like all bedtime stories, it is subject to the whims of the child to whom it is told. As such, the story changes periodically at the behest of young Alexandria, leaving logic and continuity behind. While in many other movies this would be a problem, Tarsem makes it work to his advantage here. And it must be said that his use of visuals are nothing short of breathtaking. 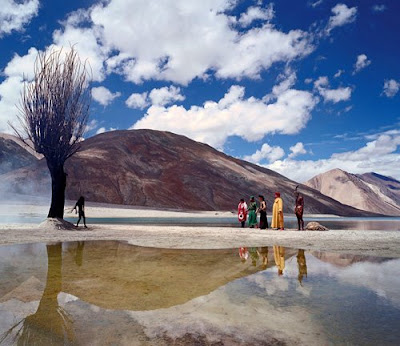 The Fall is a gorgeous film, filled with stunning sets and costumes that are rendered without the help of CGI, making it all the more impressive. Tarsem has made his film the old fashioned way, which in many ways makes it more cinematic than most of today's effects-driven fantasies. It also makes great use of Beethoven's Seventh Symphony, which could almost become iconic in the way that "Also Sprach Zarathustra" became immortally tied to 2001: A Space Odyssey, or "Ride of the Valkyries" to Apocalypse Now.

He has also made it with clear fervor and passion that borders on obsessive, but The Fall is clearly the work of a visionary artist, whose single-minded determination has brought forth a cinematic wonder that feels as if it sprung directly from Tarsem's imagination to the screen. His last film, The Cell, demonstrated a flair for creating fantastic nightmare worlds and striking visions, but the film itself was just mediocre. This time, without the restraints of big budget commercialism, he has had a chance to spread his wings and shine. His focus on the fantastical may hinder his story at times, but the ultimate effect is a knock-out.

This is cinema without limits, filmmaking at its purest and most primal. The Fall is Tarsem's imagination unleashed, brilliantly original and gloriously imperfect, and the world is a better place for it.

Anonymous said…
Now I want to see this more than I did before.

Daniel said…
Great review. I also was reminded of Pan's Labyrinth and, in some way, The Princess Bride. Neither comes close in terms of visuals, though.
11:32 AM