I don't normally post about television, not even television movies (unless it's something on the level of Angels in America), but I finally got around to seeing HBO's Recount today, and I must say I was quite impressed. 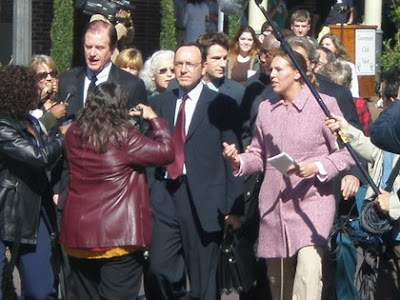 Directed by Jay Roach (Meet the Parents), Recount dramatizes the behind the scenes political maneuverings of the Florida recount in the 2000 presidential election, from the points of view of the major players, from the campaign managers to the lawyers to infamous Florida Secretary of State Katherine Harris.

The film was originally slated to be directed by Sydney Pollack, who had to bow out due to health reasons, before passing away last week.

Roach, however, has proven himself perfectly capable of directing a top notch, hard hitting drama that transcends its television roots. It doesn't hurt that he is surrounded by a terrific all-star cast that includes Kevin Spacey, Tom Wilkinson, Laura Dern, Denis Leary, John Hurt, and Bob Balaban.

It's a maddening fact based drama that shows how democracy crumbled in the face of underhanded political maneuverings, spin, and mass hysteria in the media circus that surrounded the recounts, turning the entire American political process into a cosmic joke worthy of supermarket tabloids. Roach deftly weaves through the complex legality of the story and makes its endlessly compelling.

The film is now playing on HBO, and I strongly recommend it to everyone. Look for lots of Emmys heading its way.
Email Post

Anonymous said…
I enjoyed "Recount" too!

It was fascinating, and when I was watching it the first time, I did not even know what it was called!
12:21 AM

Matthew Lucas said…
It was fascinating. I was in 9th grade at the time and didn't quite understand the gravity of what was going on. My opinions were mostly based on that of members of my family, and I was a Bush supporter (the horror!). I'm embarrassed to admit it now. I didn't see the light until about two years later. So reliving the whole recount nightmare through new eyes was a treat...although I was pretty pissed by the time the movie was over. Oh well...only a few more months and Bush is out of office. Don't get me started.
1:23 AM