Review: "When Did You Last See Your Father?" 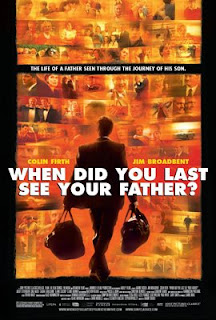 One of the most complex and intricate parts of being a male is one's relationship with their father. It is a subject that has been poured over by psychiatrists, philosophers, and artists for ages.

It is also the subject of Blake Morrisey's 1993 autobiography, And When Did You Last See Your Father?, which has now been adapted into a new film of the same name (minus the 'and') by director Anand Tucker (Hilary and Jackie, Shopgirl), and starring Colin Firth as Morrisey and Jim Broadbent as his father, Arthur.

The film starts off as Arthur learns he is dying of cancer, so Blake packs his bags and heads home to reconnect with his father during his final days. After he arrives, he begins flashing back to his tumultuous past relationship with the eccentric Arthur, who could be selfish and overbearing despite his best intentions.

Morrisey spent most of his life trying to escape from under his father's shadow and live his own life, but Arthur always had other plans, and Morrisey never quite lived up to his expectations, not being interested in the outdoors, wanting to become a writer instead of a doctor like his father, and so on. But what Morrisey always missed was the Arthur was always doing what he did in order to bring himself closer to his son, but in his teenage angst, Morrisey rejected his father and continually held him at arms length. But now that Arthur is on death's door, suddenly everything takes on a different perspective. 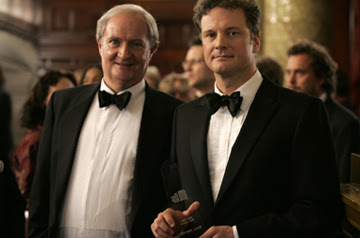 It may sound like something out of a Mitch Albom novel, and indeed the film occasionally dips into being manipulative, but Tucker directs with such a tender grace that it's all but impossible not to fall for its spell. This is a universal story about missed opportunities and second chances that is filled with beauty and compassion.

It's also devastatingly heart wrenching, the kind of thing that can make grown men cry. There's nothing like a father/son story to get men's waterworks going (think Field of Dreams), and When Did You Last See Your Father? packs a massive emotional wallop. Thanks to the appropriately distant performance of Firth and the bighearted, jovial work by Broadbent, the film truly soars. Even in its more manipulative and obvious moments, the material is constantly elevated by a true sense of love and devotion to the story. 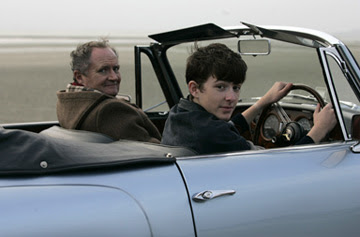 You can truly feel the passion behind every image (the film was beautifully shot in warm, nostalgic hues by cinematographer Howard Atherton), that this was surely a labor of love by all involved.

There is nothing particularly unique or unusual about the story, but that is what makes so special. It's the story of every little boy and his father, a universal tale of fathers and sons, of the gulfs between and the bonds that bring them together, even if it is not until death finally comes to call. For anyone who watches the film however, it is a call to not let those precious opportunities slip by without grabbing them. It may be sentimental, but only in the best ways, and I defy anyone to not feel their eyes burn in the films final moments.

In many ways, it resembles Tim Burton's Big Fish without the fantastical elements, and I mean that as a great compliment. It's a fantastic film, well crafted, beautifully burnished, and deeply moving. In When Did You Last See Your Father?, it is never too late to go home again.

Anonymous said…
I get this one in August.

Daniel said…
I had to sidestep your review for fear of spoilers, especially since you mentioned that it wasn't the cliched ending over on LiC the other day. Now I'm kind of intrigued...
5:45 PM

Matthew Lucas said…
Nick, don't worry, it's worth the wait.

Daniel, I always try to keep my reviews spoiler free, but I understand your concern. The film is definitely a gem and a delight to discover on one's own.
8:21 PM

Anonymous said…
Didn't have to wait too long, saw this one today, am writing my review right now.
7:07 AM