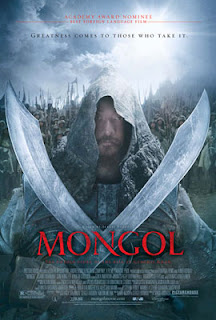 The people of Kazakhstan have good reason to be proud of Sergei Bodrov's Mongol. Not only was it nominated for the 2007 Academy Award for Best Foreign Language film, but it showed to the world that there was more to Kazakhstan than Borat and fermented horse urine.

Mongol is the epic tale of the origins of the infamous Genghis Khan, from his childhood to his uniting the tribes of Mongolia and conquering most of Asia.

The film focuses on his childhood and early life. Born Temujin to the Khan of the Borijigan tribe, he was later thrown into a life of exile after his father was assassinated by an enemy tribe, and the Borijigans were taken over by older warriors who threatened to enslave and kill the nine year old Temujin. Fearing for his life, he flees to find Borte, the girl he was betrothed to as a child, who is later kidnapped by a rival tribe seeking revenge against Temujin's father who did not fulfill his promise of choosing a wife for his son from their tribe. So Temujin goes to his brother Jamuka to unite their clans to march against the Mekrits to win back his wife. As Temujin's power and influence grow, power struggles erupt, and he sets out to unite the tribes of Mongolia under a common law, and is resisted only by Jamuka, with whom he must fight his most bloody battle. 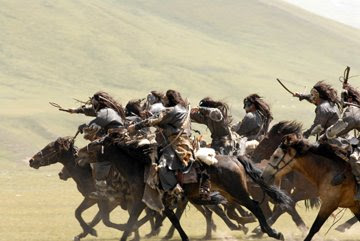 Mongol is a sweeping, thundering epic that never gets lost in its thirst for blood. The battle sequences are stunning and the cinematography is simply gorgeous, but Bodrov is more interested in things like story, character, and relationships than action. So when the battles do come, they are all the more spectacular. The Chronicles of Narnia: Prince Caspian could have learned a lot from Bodrov's intimate approach - constant battle sequences do not a great film make. The battle scenes have a greater weight when we are not constantly subjected to them. Here, they are not used like a blunt weapon of spectacle, they are used to enhance the story, which is the way it should be.

While we're making comparisons, Mongol is everything Oliver Stone's Alexander should have been but never was. Where that film was stilted and laborious, Mongol is fluid and engaging, making the most out of its breathtaking imagery and charismatic lead performance by Tadanobu Asano as Temujin. 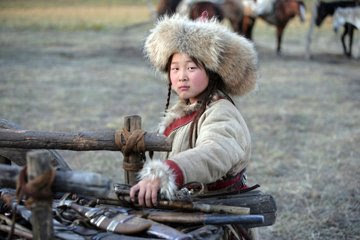 Once we get to the end, however, the film begins to lose its footing. It seems as though Bodrov was in a hurry to finish as he neared the two hour mark, so he starts skimming over details in order to get to the final battle. For instance, Temujin goes from being a slave in one scene to commanding the combined armies of most of Mongolia in the next, and we never see how he gets from point A to point B. Instead, the gaps are filled in by narration and title cards, which are no substitute and seem like a bit of a cop out. Mongol could have easily been a three hour film and been just fine, but around the two hour mark it starts cramming things in, as if it were trying to finish on some kind of arbitrary two hour deadline.

In fact, the film was engaging enough for me to want it to keep going. The majority of the film is top notch epic filmmaking, expertly crafted and beautifully paced by Bodrov, but the final act leaves a lot to be desired. It's as if the film was running a marathon and leading the entire time, but gives up in the final leg and chugs across the finish line somewhere in the middle.

Overall, Mongol is quite an accomplished work. This is filmmaking on a grand and rare scale. If only it hadn't stumbled in the final round it could have been great. It's still nothing to sneeze at though, because in light of 300 and other modern "epics," Mongol is a refreshingly old school light in the darkness.

Daniel said…
I'm curious to see this if only as a new and rare take on Genghis Khan. The trailer doesn't make it out to be more than straight combat for a few hours. Is there any actual drama to it?
5:53 PM

Matthew Lucas said…
Oh yes, it's surprisingly battle-lite. It focuses much more on the drama and characters than on epic action.
6:04 PM