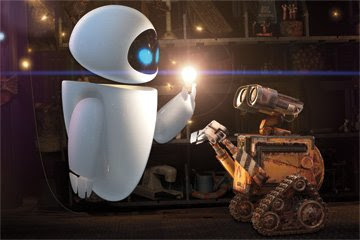 Disney/Pixar's WALL-E is just about as close to avant-garde as any modern children's film is ever going to get, because it is essentially a silent film.

Pixar-wise I think it falls somewhere between Finding Nemo and the original Toy Story. I still think Ratatouille is the studio's finest effort. But WALL-E is such a beautifully unique joy. It takes two characters who can barely say anything more than each other's names, and builds an entire narrative using mostly just images and Thomas Newman's gorgeous score.

The filmmakers can deny, deny, deny all they want about WALL-E's "green" themes, but they're there, and quite blatant. It's above all a love story, but it's a love story with a message, and some very pointed satire. I think in many ways Disney wanted to do some damage control, lest conservative middle America catch wind that this is some kind of pro-environment anti lazy fat ass movie. Which it is, in all honesty. It's a film about being good stewards of the planet and of ourselves lest we fall into some kind of mega-corporate nightmare where everything is a marketing tool and we're just drooling, obese sheep who have been lulled into a kind of walking death.

But enough about all that. WALL-E is a sweeping, glorious film with a sense of humor reminiscent of the films of Charles Chaplin and Jacques Tati. It's a groundbreaking work of art, both breathtaking and intimate in its scope. Pixar has scored another triumph, and WALL-E is the best American film so far of 2008.

My full review will be published in The Dispatch on Thursday.
Email Post

Daniel said…
I wasn't bothered in the slightest by whatever message was supposed to be hidden in there. I thought it was funny, light, and romantic. Yep, I loved it, too.
1:43 PM