Some Thoughts on "Get Smart"

The term 'painfully unfunny' comes to mind. This is great comedy as ruined by big budget corporate mentality. Get Smart ultimately takes itself too seriously, and tries too hard to be an action-centric comedy aimed at teenage males, therefore neutering it of all the incisive zing and intelligent satire of the similarly themed French film, OSS 117: Cairo, Nest of Spies, which was released earlier this year. 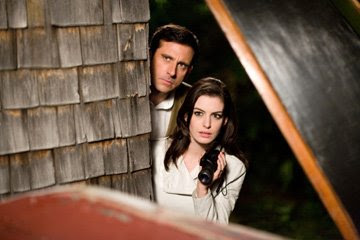 It stumbles even more when it tries to foray into political humor, where the jokes fall embarrassingly flat. I almost felt bad for the actors who had to chew on the tired dialogue, filled with one liners that second rate stand-up comics would have found outdated five years ago.

I'll be hammering out a full review for publication this week, but I just wanted to get my opinion up there while the movie is fresh in theaters and on my mind. I didn't hate it like I did The Happening, it's not totally inept, but it is gratingly indicative of the direction that studio bigwigs push these summer films in, complete with bombastic, wholly inappropriate Media Ventures score by Trevor Rabin, that doesn't compliment the jazzy, wailing saxophones of the television theme at all.

It's a bland, generic, assembly line action comedy, that I'm sure will pack 'em in and make millions, when there are so many more worthy films out there being totally ignored by mainstream audiences.

Anonymous said…
Perhaps, but you DO get to look at Anne Hathaway for a couple of hours. How bad can THAT be?
12:46 AM

Fletch said…
"I didn't hate it like I did The Happening"

Haha - I was thinking that I didn't hate it like I hated The Incredible Hulk.