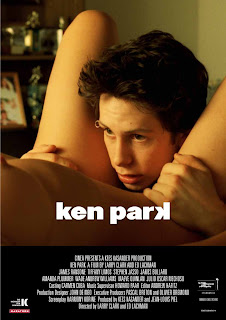 Larry Clark and Edward Lachman's infamous Ken Park may never see a US release. In fact these days it would be lucky to be screened anywhere at all.

Currently banned in its home country of Australia, Ken Park tells the story of four teenagers, their miserable home lives, and the sexual exploits they undertake to escape it all.

Despite rumors that it has never screened commercially in the United States because of its explicit sexual content, the real reason has to do with a music rights debacle that has never been solved. The explicit sexuality, which may be an issue in some countries, isn't so much a problem here, as Ken Park is nowhere near as graphic as John Cameron Mitchell's far superior Shortbus, which played on American screens two years ago (and was on my 2006 top ten list).

It has enough elements that work that it's not a complete waste, but the dots are never connected. The elements that could have clicked never are never given any cohesion.

Reel Whore said…
Provocative poster but glad to know I don't need to put it in my mental rolodex for future viewing.

Shortbus! I'm glad someone else besides my wife and I saw this.
2:21 PM

Okay, so I do not want to see this film, it just sounds gross. I am just as open minded as the next person, but hell no do I want to be subjected to that, no thanks.
3:54 PM

Curiousityloko said…
I got to see Shortbus with Paul Dawson (the guy who played James.) It was a great film, my number five of 2006, but it was very ummm strange to watch a movie with him sitting two seats down. Afterward we went to the after party and he talked with my friend about his most famous scene from the start of the film. Cool night though.

Though I agree with Nick about this film, sounds pretty damn gross.
8:18 PM