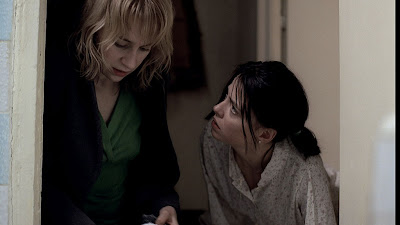 Halfway through 2008 and it's still by far the year's finest film. If you haven't seen Cristian Mungiu's Palme D'Or winning Romanian masterpiece, now's your chance.

Anonymous said…
I still have not seen it!!!

I will download it over the next week though.
1:08 AM

Anonymous said…
Matthew: I bought my copy last week at Kim's Video, but sadly as DVD Beaver announced in their review comparisions, this Region 1 is far inferior to the corresponding AE Region 2, which correctly maintaing the 2:35 ration. I feel I have wasted my money, since I will need to obtain that Region 2, which is also is touted as a better transfer.
2:24 PM

Matthew Lucas said…
I can't find a copy ANYWHERE, and Amazon doesn't even know it exists. So I rented it from Blockbuster and just intend to keep it. If you don't return it within 30 days they just sell it to you for $25.00 more. This one's worth it.
5:22 PM