Defamer's Stu VanAirsdale has posted a rant about the new 2-disc collector's edition of There Will Be Blood, and I couldn't disagree more. 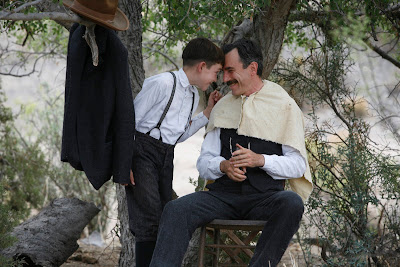 I bought the film on the day it was released, and having watched the special features have come to the conclusion that it is one of the finest (albeit idiosyncratic) discs of DVD extras I have ever seen.

Extras were once a unique and special thing that have now become expected, just as 2-disc DVDs were once reserved for only the very best or most special films, but now every movie has to have a 2-disc set.

Most are packed with filler; trailers, generic making-of docs, and banal interviews with the cast and crew. Not There Will Be Blood.

It is true you won't find a single making-of documentary anywhere on the disc, instead we are given a 1923 silent film about the oil industry called The Story of Petroleum, set to music by the film's composer Johnny Greenwood, deleted scenes that are woven flawlessly into the film's footage to create mini works of art unto themselves, and a 15 minute montage of images from the film juxtaposed with old photographs of prospectors and mining towns that inspired them.

Paul Thomas Anderson has defied expectations of course, and instead of delivering typical extras that offer no real insight, or uncover every aspect of the filmmaking process, and made the extras an extension of the film. Like the short films on the 2-disc special edition of Punch-Drunk Love, the deleted scenes here are not your typical, out of context scenes that make clear why they should never have been in the film. No, Anderson fashions them into mini-mood pieces that stand on their own - impressionistic works of art as haunting and beautiful as the film itself.

There Will Be Blood is a film that should stand on its own. And by stubbornly refusing to blow the lid off his process, Anderson allows it to do just that, leaving the film's mysterious, enigmatic qualities intact.

When a film passes into history as a revered classic (such as Citizen Kane), the time comes to examine its production from all angles for a historical perspective. That time has not come yet for There Will Be Blood. There's far too much going on onscreen to be examined to worry about what's going on behind the camera.

VanAirsdale's rant reeks of greedy fanboyism, the kind that wants everything laid out for them and every mystery explained; who are constantly demanding more more MORE from the directors that they worship. I prefer There Will Be Blood the way it is, and I hope VanAirsdale's call for a new, more exaustive DVD release to make it to stores sometime in the near future doesn't come true.

This is one movie that should be left alone.
Email Post

Anonymous said…
What more do you need besides one of the best movies of recent memory? It speaks for itself.

Matthew Lucas said…
Agreed. I can't believe Jeffrey Wells went along with this. Well, yes I can but I'm still a little surprised. I never thought he'd side with the geeks on something like this.

Has he even watched these extras? Brilliant!
4:07 PM

Anonymous said…
Rub the salt into the wound....

I am sure the current DVD is amazing, and will get my hands on it as soon as possible, in the mean time, just enjoy that damn thing for me, won't ya?
4:32 PM