Movies I Love (That No One Else Does)

We all have them - movies that hold a special place in our heart that seem to mean nothing to everyone else. They're usually obscure, critical or popular bombs that happened to hit us just right.

This may end up being an ongoing series here, but for today I want to chronicle three films that I hold near and dear to my heart, that the rest of the world has put out to pasture. 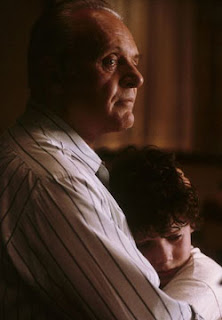 1. HEARTS IN ATLANTIS (Scott Hicks, 2001)
2001 was a special year for me. It was the year that I truly discovered cinema with Robert Altman's Gosford Park, and I haven't looked back since.

Few films have touched me as deeply as Hearts in Atlantis. Based on the first short story, "Low Men in Yellow Coats" from Stephen King's novel Hearts in Atlantis, the film tells the story of young Bobby Garfield, who one day meets a mysterious stranger named Ted Brautigan (Anthony Hopkins), who moves into the upstairs room, and seems to have strange psychic powers.

Over the course of one summer, Bobby falls in love and begins the path to adulthood under the wing of Ted, who becomes the father that Bobby never had.

I've always been a sucker for puppy love stories, and films about adult longing for childhood always get to me. Hearts in Atlantis wraps both up together, and I cry every time I watch it. The scene where Bobby carries the injured Carol up a hill while the sounds of Ted's tale of the great quarterback Bronco Nagurski fades in and out of his mind to the swells of Mychael Danna's heartbreaking score is one of my favorite scenes of all time.

This is powerful stuff. Sentimental and nostalgic yes, which is why many critics panned it I'm sure, and the cynics with the blackened hearts poo-poohed it and brushed it aside. But for me, Hearts in Atlantis has always been something special. Perhaps it was the timing - it was the first film I saw after 9/11, and it struck just the right tone, and is still the best film I have ever seen about childhood and growing up (along with To Kill a Mockingbird). It remains one of my favorite films of all time, and is one I will cherish forever.

Angela's Ashes, the film adaptation of Frank McCourt's bestselling, wildly popular memoir, should have been a cinematic event. But it wasn't. It generated brief Oscar buzz for Emily Watson's performance, garnered a nomination for John Williams' beautifully mournful score, then faded into obscurity. 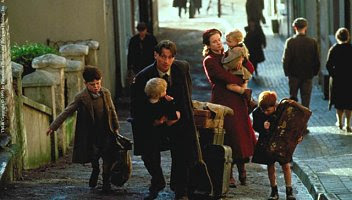 But I thought Parker managed to capture just the right tone in bringing McCourt's tale to life. Yes it's downbeat, but it has to be. He captures depression-era Ireland with breathtaking detail, but through McCourt's indomitable spirit, always manages to find hope amid the despair.

Watson should have been nominated for Best Actress that year, no question, but for me the film was one of the top 5 of 1999, certainly better than eventual Best Picture nominees The Cider House Rules, The Sixth Sense, and The Green Mile (I fully agree with the winner, American Beauty). I've always felt that Parker manages to bring the audience into McCourt's family, which is what I love so much about the film. He gives it an immediacy and a realism that puts us in the gritty Irish slum in a way that owes much to Italian neo-realism. And it's gorgeously shot to boot. Poverty has never been so heartbreaking, yet so beautiful.

Yes, Brest went on to make Gigli after this. But for one shining moment, the man had something magical on his hands. 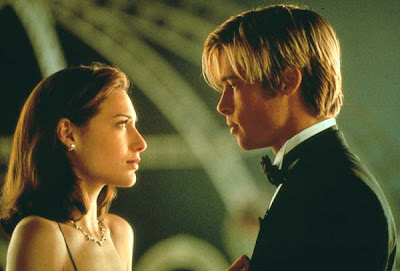 I have honestly never understood why this film (a remake of the 1934 Death Takes a Holiday) is so maligned. Yes it's three hours long and has no real reason to be, but I love every minute of it, and always have.

I recently replaced my old VHS copy that I've had since my early teens with a DVD copy, and I can't wait to dive into it again. It's a fascinating story - Death (Brad Pitt) offers a wealthy executive named William Parrish (Anthony Hopkins) an extension on his life in exchange for showing him what it's like to be alive. Everything is going well, until death falls for Parrish's youngest daughter, Susan (Claire Forlani).

It's long, but incredibly absorbing, and Brad Pitt has never been better. His distinctive portrayal of two different characters (yes, 2) is astonishing, and he should have gotten recognition for it. But the movie was too hated for that. Which I've always found strange because I love it - it's a sweet, quirky, and ultimately moving look at life through someone who has never lived, and a celebration of the things that make us human.

Add that to the finest score Thomas Newman has ever composed (the final piece is nothing short of spectacular), and you have one wonderful, terribly underrated film.

I'm sure stating my love for a film like Meet Joe Black will probably open me up for attacks from snobby fanboys, but I don't really care. Feel free to disagree, but I love what I love and if you don't like it you can fuck off. Life's too short to deal with assholes with superiority complexes.

Movies touch us for special reasons, and the ones we hold dear can never be fully explained to those who don't understand.

So now I would like to hear from you - what movies speak to you but seemingly nobody else? You never know, we just may find some kindred spirits out there with our own uniquely eclectic tastes.
Email Post

Curiousityloko said…
I love...I mean love...as in top twenty movies...Meet Joe Black. I am quite pleased to see it on your list.

My other big movie like that was Elizabethtown. I adored that movie in spite of its critical lambasting.
5:41 PM

Curiousityloko said…
And I should say as a fan boy of all things Cameron Crowe Vanilla Sky. Yes, Abre Los Ojos was better, but it was still as good as remakes get.

OH, and one from this year. Across the Universe. Many folks, including yourself gave in horrible reviews( or it would seem from the rating on the side of the page.) I voted it the the third best film of 2007. Just barely not as good Into the Wild and There Will be Blood. It was a film that really spoke to me and one that I thought was very finely crafted.
5:53 PM

Anonymous said…
I love posts like this! I have a few films I love too that no one else does. But yeah...I would be happy if it would be an ongoing series...

I have never seen Hearts in Atlantis, I really liked Angela's Ashes and Meet Joe Black, but clearly not like you did. I am glad you are vouching for them now, always a good thing.

One of my favourite films ever that is underappreciated is Thirteen, but I have totally spoken about that one enough.

Okay, some recent films that I loved that no one else did or films that are underappreciated are:

Fur: An Imaginary Portrait of Diane Arbus (2006), Skeleton Key (2004), A Home at the End of the World (2004), Running With Scissors (2006), Intermission (2003) and I guess I feel the same as curiousityloko about Across the Universe. I think that those films have a few dedicated fans but not nearly enough to make anyone really sit up and say that they might give them a second thought. I don't expect them to either.

Patricia Perry said…
I love this post. I really like "Hearts in Atlantis" and "Meet Joe Black," but I dearly LOVE "Angela's Ashes." I am absolutely in agreement with you that it did not get its proper critical due back in 1999. The book was one of my all-time favorites, too,and I think it was a great accomplishment to make a film adaptation that was every bit as good as the source material.
6:49 PM

Matthew Lucas said…
Glad to see all the love for "Meet Joe Black." I definitely think it's hugely underrated.

Nick, I too loved "Thirteen," but it got a lot of critical praise at the time of its release. It just isn't that well known, which is a shame.

I haven't seen any of the other movies you mentioned...I'll have to check those out.

Thanks for the response guys, I may have to make this a running feature on the blog!
10:08 PM

Fletch said…
I've never seen the first two, but I can comment on Meet Joe Black.

You pass over it, but I think the length is a HUGE part of what killed this film for just about everyone. It's at least an hour too long, which unless your film is 8 hours long to begin with, is just too much to be forgiven for.

I think it has some inspired moments, and I'm a big fan of the two leads, but Claire Forlani also kills this movie with her bad acting and constant squinting. I mean, she's terrible in Mallrats, too, but at least she ain't the only one, and Mallrats isn't supposed to contain high octane acting.
1:34 PM