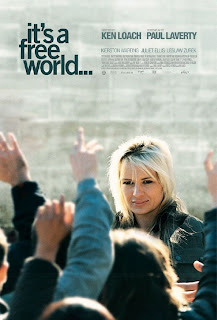 As a fan of Ken Loach's last film, the Palme D'Or winning The Wind that Shakes the Barley, I had high expectations for his latest effort, It's a Free World...

In the end I found the film both fascinating and maddening. Loach is first and foremost a political filmmaker, and It's a Free World tackles one of the most divisive and contentious issues of our time - illegal immigration.

The film centers around Angie (Kierston Wareing), who after being fired from an employment agency for bad public behavior, decides to open one up on her own. But instead of going about it the legal way, she enlists the help of her reluctant friend Rose (Juliet Ellis) to recruit illegal immigrants for lower wages in order to make money off of them.

Eventually things get out of control, and Angie loses sight of her desire to help and begins calling Immigration officials on her clients in order to make room for new ones coming in.

Loach does a good job of examining the complexities of the issue - from their need to work and seek a better life even if they can't obtain a visa, as well as their abuse by employers. It's a double edged sword - they cannot obtain visas, they cannot return to their own country, and they are abused by employers looking for cheap labor that isn't protected by the government. What it amounts to is a recipe for disaster. 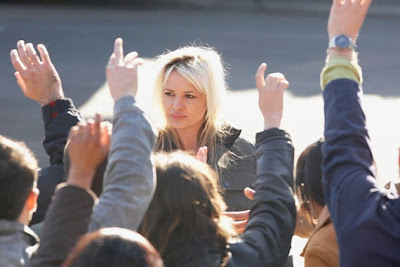 While It's a Free World... is never as dynamic or compelling a film as The Wind that Shakes the Barley, and it tends to have a more lecture-like quality, but it nevertheless works on several levels, even if the first half of the film is a bit dry. It makes for an interesting drama (and later a thriller), but the political aspect is without a doubt the strongest and most interesting to ponder.

It's pretty clear where Loach stands on the issue, but he doesn't offer any solutions, which is what, ultimately, makes the film work. 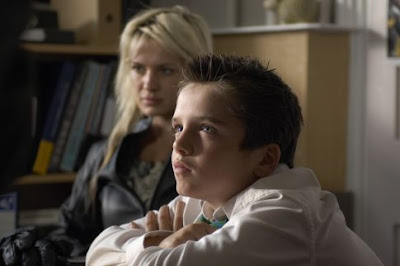 Now it may seem that from how I have described the film thus far that Loach is an American and It's a Free World... takes place in America. But that is not the case. Loach is British and the film takes place in England. So it is interesting to see how universal the issue is, unlike the common misconception among many Americans that we are the only country in the world people want to immigrate to.

That is ultimately what I liked about the film. It is not a great film, and isn't Loach's best work, but it is effective in its aims and is definitely something worth watching and discussing. It lays bare the problems with the issue for our consideration and leaves us wondering how it could possibly be fixed.

It is a breath of fresh air from all the shrill, generally racist rhetoric of our current political square. Leave it to art to shine a bright light on the problem...what a shame that so few people will ever see this film.

Anonymous said…
I was not much of a fan of "The Wind that Shakes the Barley," so is there any possibility that I will like this film?

Matthew Lucas said…
If you didn't like "The Wind that Shakes the Barley" you most likely won't like this, as this is much more mundane. But you never know, it's worth checking out but I wouldn't put it at the top of your list.
5:26 PM

J.D. said…
I was surprised by how much I liked and admired The Wind That Shakes the Barley. And for as long as I've known this movie has existed, I've been intrigued by it, so whenever the hell I see this, I'll probably like it. *thumbs up*
7:01 PM