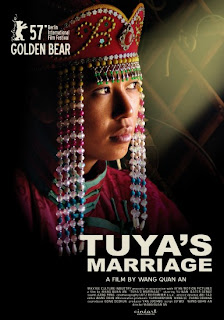 After seeing the brilliant documentary The Story of the Weeping Camel several years ago, I have discovered that I have a soft spot for films about the lives of indigenous Mongolian people who live out in the desert.

Chinese director Wang Quan An's Tuya's Marriage takes the fictional route, but uses some of the same techniques that made Story of the Weeping Camel so wonderful. Wang uses native non-actors to bring his story to life (most using their real names to play their characters), and it adds another dimension of raw naturalism that not only lends the film an astonishing sense of authenticity, but also a sense of immediacy that might not have otherwise been present.

The film centers around a shepherd named Tuya, who suffers a severe physical injury while trying to free a trapped neighbor from his overturned truck. No longer able to work to support her family, Tuya is forced to find a new husband who can not only provide for her and her children, but also her disabled husband as well.

It is a deeply poignant story, and it is given an added gravity by Wang's intensely personal direction. 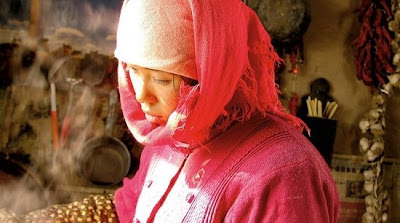 Wang makes great use of the beautifully windswept landscapes of the Mongolian desert, but he never lets style overwhelm the story. In fact it is a very visually pared down film, as simple and yet as moving as the shifting sands of the Gobi.

Yet beneath its sparse exterior lies an achingly romantic tale of longing, devotion, and the lengths that people are willing to go to for love.

Tuya loves her husband deeply, but she knows that if they are to survive she must divorce him and marry someone else. Wang explores this with the eye of a consummate filmmaker, turning a simple story against a barren landscape to create an emotional experience worthy of goosebumps. 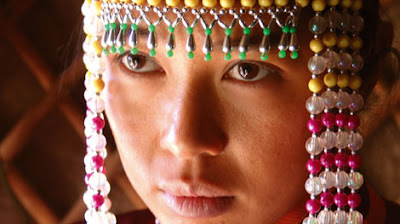 Tuya's Marriage came out of nowhere last year to win the Golden Bear at the Berlin Film Festival, beating out Steven Soderbergh's The Good German, Robert DeNiro's The Good Shepherd, Academy Award nominee Beaufort and Academy Award winner The Counterfeiters, and La Vie En Rose. No small feat to be sure, and very impressive for a film of its size with a cast of total unknowns.

But it is a worthy film, strong enough to stand toe to toe with any of the aforementioned films. It may not have made such a huge splash when it opened in stateside in one theater in New York a few weeks ago, but it more than deserves attention. It is a film with a huge heart that is at once comic, tragic, and everything in between.

Nice review indeed, first time I heard about the film, I think.
11:48 AM