"There Will Be Blood" on DVD

For those of you who have yet to see Paul Thomas Anderson's sprawling epic There Will Be Blood (From the Front Row's pick for the #1 film of 2007), now is your chance because the film arrives on single-disc and 2-disc collector's edition DVD today. 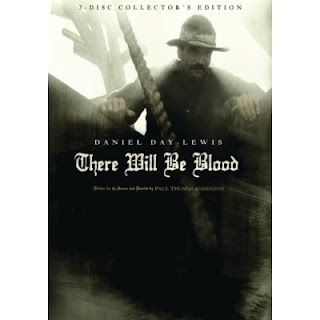 Anderson's staggering tale of family, greed, and the lust for power set against the backdrop of the oil boom at the dawn of the 20th century is a classic portrait of the dark side of the American dream, and the destruction of one man's soul by the insidious obsession with power and wealth.

It is also a showcase for what is hands down one of the defining performances of the new century. Daniel Day-Lewis' raw, explosive performance is the stuff of legend, a towering achievement that won Day-Lewis a hugely deserved Academy Award. 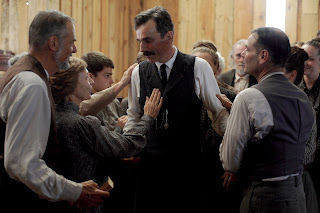 It's hard for me to talk about Blood without sounding like I'm gushing, because the film is a masterpiece, pure and simple. This is filmmaking of a rare brilliance that transcends words and actions and asserts itself and demands to be noticed. It is vivid, it is urgent, it is powerfully contemporary yet steeped in classical style and evokes a time and a culture long since passed as if it were happening at this very moment.

Anderson transports us, engulfs us, and overwhelms us in a wholly alien yet strikingly familiar world that is both of its time and ours - always relevant, and always utterly engrossing.

It was, is, and ever shall be, the greatest cinematic achievement of 2007.
Email Post

Curiousityloko said…
*Does a happy dance.* That is all I can add. Totally in agreement. Best piece of film making 2007 had to offer.
1:41 AM

For, like, a while now, I've been seriously thinking this is better than Atonement... which is a personal equivalent to a religious revolution. It's war, man, WAR!!!!!!!