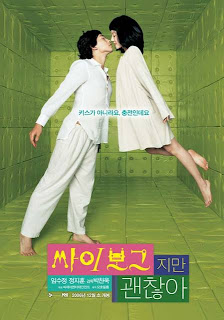 One of the greatest pleasures in life is discovering a relatively unknown movie and discovering something that totally blindsides you.

Such was the case for me with Chan-wook Park's (Oldboy) wonderful and whimsical I'm a Cyborg, But That's OK.

Set in a Korean mental institution, I'm a Cyborg, But That's OK tells the story of Cha Young-Goon, a schizophrenic young woman who believes herself to be a combat cyborg, who meets a young man named Park Il-sun, who believes he has the power to steal the traits of others and is afraid of one day vanishing into a dot, and forges a strange and unexpected connection. Together they try to uncover the meaning of life Young-Goon's similarly schizophrenic grandmother, who believed herself to be a mouse and would only eat radishes, imparted to her as she was carted off to a sanatorium.

It is a wholly unique and beautiful film, filled with a singularly quirky sensibility and directed with pure imagination. What Park has created is nothing short of astonishing. There are really no words to do this film justice. 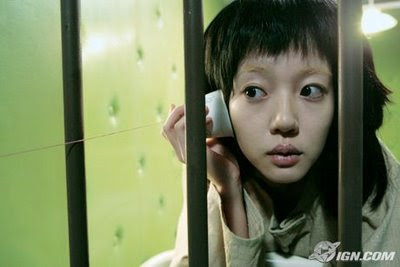 The closest thing can possibly come up with is by taking Amelie and adding killer cyborgs. But that doesn't quite capture it either. This is a truly original work of art, set in a world where through the mind, anything is possible. In many ways, these mental patients have it better than anyone else, because their minds have set them free to be whatever they want to be. They can escape the confines of the sanatorium and fly with ladybugs, or sit on an oceanside cliff at the edge of a rainbow.

Nothing is impossible in this this window to the mind of the insane, but it is never forced and never rings false. For a world so highly stylized, Park allows it to flow organically as if it were flowing directly from his imagination to the screen.

I'm a Cyborg, But That's OK is a work of genius. There is no other way to describe it - it's a work of mad, gleeful, creative genius. It is without a doubt one of the most completely original romantic comedies I have ever seen. 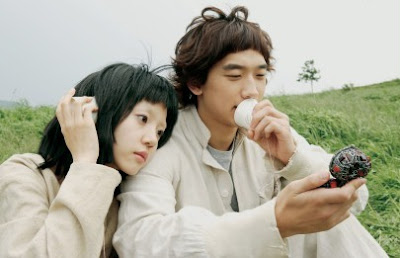 It's too bad that the film has yet to be released in the United States, and as far I know, there are no current plans to put it on US screens. It was released in South Korea two years ago, and played at the Berlin Film Festival last year, where it won the Alfred Bauer Prize for innovative work.

Maybe it's too unusual for US audiences, who knows? All I know is that this is a brilliant film, one that deserves to be seen and loved for the masterpiece that it is. I LOVED this film. THIS is what filmmaking is all about. American film could use more of this kind of free wheeling, experimental energy, because every frame of it seems gloriously vibrant and alive. It is a world I never wanted to leave, and hope to visit again very soon.

Movies like this don't come around very often, and when they do they should be embraced to the fullest, and I'm a Cyborg, But That's OK is a once in a lifetime event.

WHY WON'T THEY JUST RELEASE IT?!