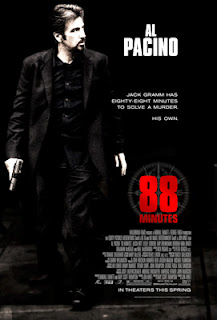 Considering the advance buzz surrounding 88 Minutes, I was expecting a disaster of epic proportions - something on par with Battlefield Earth. Well I'm pleased to report that Al Pacino's latest vehicle isn't nearly that bad, and that reports of its awfulness are somewhat hyperbolic.

That being said, 88 Minutes is still nothing worth writing home about. In fact it's a pretty standard crime thriller. Pacino stars as Jack Gramm, a forensic psychiatrist and college professor who receives a threatening phone call telling him he has 88 minutes to live on the day of the execution of his most high profile conviction, whose guilt is thrown into question by a copycat murder.

The story itself is mildly compelling (mostly thanks to Al Pacino's compulsive watchability), but the problem isn't with the set-up so much as the execution. 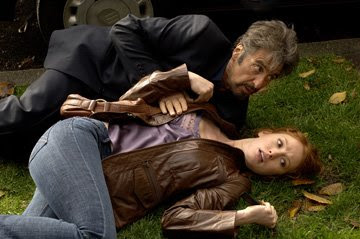 Watching the film was a strange experience. I kept finding myself thinking "oh come on!" every couple of minutes, or rolling my eyes at the lame coincidences and outlandish twists thrown in to further the plot, but I found myself oddly entertained. It held my interest at all times, even at its silliest, which can probably be attributed to Pacino. If anyone else had been in that role, the film would have even less credibility than it does.

Which isn't saying much considering it only received a theatrical release to save Pacino the indignity of a direct-to-DVD release, a medium to which it's probably better suited. 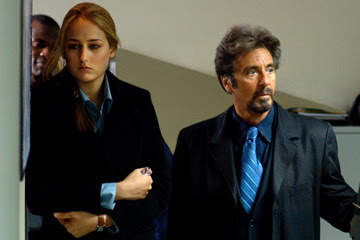 88 Minutes is a great cable movie. It's the kind of thing you flip back and forth to during commercials of something else you're more interested in. It probably has a long life ahead of it on TNT.

I wanted to hate it, but I couldn't. Pacino is magnetic no matter what he's doing, even if his surroundings aren't quite up to par. 88 Minutes is strictly second-tier fare, but at least it's not Prom Night. Hell, it's not even Savage Grace, but that's another story for another review.

Anonymous said…
Too bad it has quite a good cast, but I will skip it indeed, even if your review does not make it out to be an epic disaster.
8:50 AM