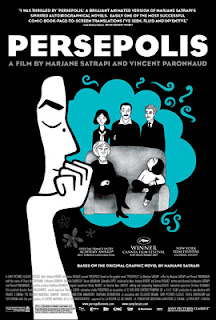 I saw Persepolis for the first time weeks ago, but am just now bringing myself to write a review. Chalk it up as laziness, or probably more accurately, as a need to let the film sink in and digest for a while.

Put simply, I didn't quite know what to say.

Those who know me will find that to be quite unusual I'm sure, but Persepolis is such an interesting, unusual film that it's hard to find the right words to do it justice.

Based on the series of autobiographical graphic novels by Marjane Satrapi, and directed by Satrapi and French director Vincent Paronnaud, Persepolis chronicles the life of an independent minded girl growing up in Iran during the revolution in the 1970s, and later during the period of oppression by a government ruled by Islamic fundamentalists.

One would think that this would make a fantastic live-action coming of age drama, but in a wholly unique (and ultimately, correct) move, Satrapi chose to make the entire film animated in the style of her black and white drawings, using only sparse color when the film is in the present day (the rest is told as a flashback). 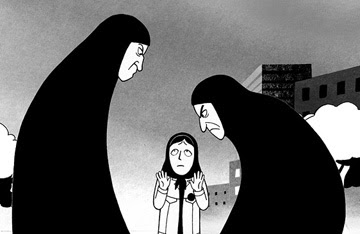 Marji is an outspoken spitfire, a trait that often gets her into trouble with her teachers, who are devoted to the more hard-line mullahs under the rule of the Shah. However, when the Shah is overthrown, the lives of Marji and her family are thrown into turmoil, as her family is on the frontline of the revolution, only to itself fall under the oppression of the new Islamic government.

For someone who lived through such hell, one would almost expect a trace of bitterness in Satrapi's storytelling, but instead she directs with a light hand and a keen sense of irony that never feels forced or angry. It is more of a lament, a poignant ode to Iran that could be, and in some ways once was. It is that sense of poignancy of wasted potential very present in Khaled Hosseini's The Kite Runner that Marc Forster's film adaptation failed to capture. While much of Persepolis is quirky and funny, there is an underlying sense of melancholy of seeing one's home turned into a harsh place that is no longer recognizable. 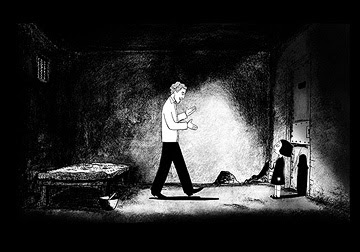 Satrapi also has an acute awareness of what it is like to be a child. Her young alter-ego is one of the most real cinematic children in recent memory, and to be a 2-D animated character, that is quite a feat indeed. But the film's simple style is so singular and so beautiful that it's almost easy to forget that what you are watching is animated. These are living, three dimensional characters that totally defy their two-dimensional medium.

It becomes almost free-associative after a while, switching back and forth between the present day, Marji's childhood exploits, and imagined conversations with the likes of God and Karl Marx. But Satrapi keeps it all grounded in reality, never straying far from the emotional truth of any given moment, whether it is achieved through comical absurdism or through impressionistic realism - the war scenes are especially haunting, and when added to Olivier Bernet's free-wheeling and mournful score, you have something that reaches near transcendence. 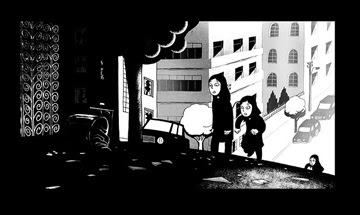 But for all of its artistic qualities, Persepolis is first and foremost a window into a world few Americans understand - and they understand even less the West's involvement in creating the current situation in Iran. That elevates the film from a mere tragic memoir and into something that should really be essential viewing for everyone who sees Iran as an unmitigated enemy of the United States. Persepolis humanizes a culture that is often vilified in America and presents a much more complex worldview than simple "us vs. them" mentality.

It is a masterful balancing of socially conscious drama, childhood memoir, and outright comedy, highlighting the absurdity of a culture ruled by petty fundamentalism. It is a film whose relevance resonates beyond Iran - and is at once a fascinating first-person historical account and a gorgeous work of art.

ePastor James said…
This review is too amazing and extracted from my wavelength to comment on every single brilliant point, so I'll simply say: PERSEPOLIS IS PHENOMENAL. Oh, and so are you for the terrific review =P.
4:30 AM