It's impossible to look away from this chamber of horrors, which is the closest to evil I have ever seen a movie get. It's sick, twisted, and depraved in ways that Eli Roth (Hostel) can't even reach. But it's also one of the most brilliantly constructed thrillers in recent years. 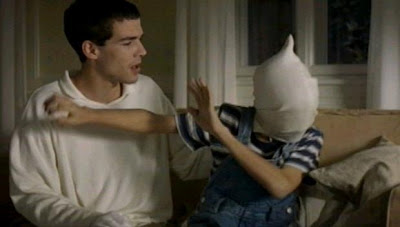 We don't actually see the central characters until several minutes into the film, which opens with an aerial shot of an SUV traveling down a winding country road, while the heard-but-not-seen occupants play a guessing game with opera music. Games are a very central and ever present element of the film.

Soon the plot begins to unfold as two articulate young men invade the home of the wealthy family and proceed to humiliate and torture them, both mentally and physically, during a night of brutal "games."

Haneke (Caché, The Piano Teacher) structures the film using alienating Brechtian devices (the characters frequently break the fourth wall and address the viewers directly - the screamo rock music also has a jarring effect) to set the audience on edge, and provides a viewing experience that is so intense that it is nearly unbearable. Funny Games is every bit as torturous for the audience as it is for the characters involved. 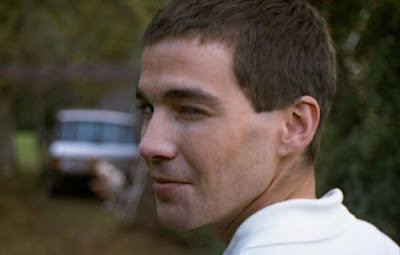 So what's the point, why watch something so deeply disturbing that it seems as if it is trying to push the audience away? Because it's a jaw-dropping work. Haneke may be punishing the audience in ways that are increasingly unpleasant, but it has so much to say about random, unspeakable violence. We quickly find ourselves rooting for the besieged family, and are hoping for a violent retribution against the villains.

So where does that leave us? In the same boat as the young psychopaths? At what point do our wishes become just as evil as theirs? There is no point to their violence, they are evil without conscience, intelligence without control. There is no reason to their senselessness, and Haneke seems determined to berate us with their cold-hearted sadism.

Yet we, as the audience, are invited to participate in their amoral game, and soon we have to question our own feelings, lest they stray too close to the vicious antagonists we are rooting against. 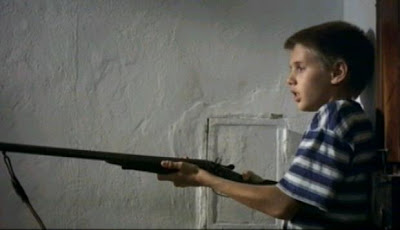 He also seems to be railing against a society infatuated by violence, almost as if saying "you want violence? huh? well here it is!" except that most of the violence occurs offscreen - it's the brutal effects of it that have the most impact.

Haneke is a master of suspense, and he demonstrates his flair for nerve-shredding dread very keenly here, defying expectations at every turn. His master craftsmanship is undeniable, - he is the modern day equivalent of Hitchcock, as his recent Caché also suggests.

I haven't seen any films more unnerving or warped than Funny Games, and Haneke's upcoming shot-for-shot remake starring Naomi Watts and Tim Roth promises to be just as wicked.

It's a hard movie to like, but it's a very easy film to respect.