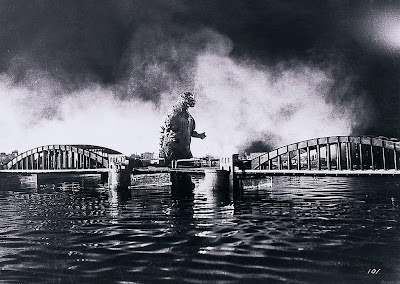 In light of the recent 9/11 inspired Cloverfield, The Guardian has a run-down of other monster movies with real life echos:

The Host
Even the smallest monster on this list is still bigger than the combined mass of acting "heavyweights" Orson Welles, Marlon Brando and John Candy. The family-level, anti-pollution eco message the film delivers is more poignant than a thousand coulda-been- a-contenders.

King Kong
The first monster superstar. A metaphor for the unknown, supposedly savage corners of the world, he's a lover and a fighter who has outlived all his original, puny human co stars.

Godzilla
Despite a succession of increasingly silly sequels, towering radioactive lizard Godzilla provided a thrilling and cathartic way for the Japanese to face the horror of Hiroshima and Nagasaki.

Pulgasari
Kim Jong-Il kidnapped a South Korean director and forced him to make this film to show the world that capitalism - in the form of a metal-munching beast - was a bigger monster than he was. Not sure that that was the right way to go about it.

Cloverfield
The 9/11 monster. Decapitating the statue of liberty seals his freedom-hating credentials. Its unprovoked attack and mass destruction of property are clearly bad things, but its penchant for going after good looking people is something we can all get behind.