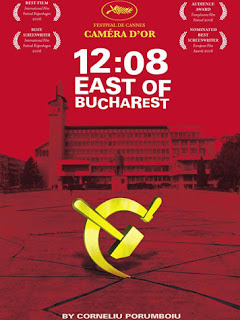 It's official. I'm in love with the Romanian New Wave.

I went to my local indie video store to check out a copy of 12:08, and I asked one of the clerks if they had a section of Romanian films (they divide their foreign films into country), and he replied "you're holding it."

The only other Romanian film they had was Lazarescu, which I had already seen.

But I guess I shouldn't be surprised, Romanian film hasn't been that big until the last few years, with Lazarescu being one of the earlier works in the movement, and 4 Months being its current vanguard.

I missed 12:08 when it played at the RiverRun International Film Festival last April, and have been kicking myself ever since. Although the film I ended up seeing instead (Lars Von Trier's equally deadpan Danish comedy, The Boss of it All, in its North American premiere) was quite good so I didn't kick myself too hard.

But now that I have seen it...wow. I will see anything coming out of Romania without question. These people know how its done. 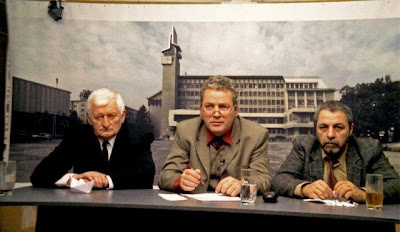 12:08 East of Bucharest centers around a television journalist's quest to find out whether or not a revolution took place in his tiny Romanian town, 16 years after the fall of communism. He invites two "eye-witnesses" to the great revolution of 1989 - an elderly Santa Claus and a drunken professor, who turn out to be not as reliable as they originally appear.

The film features many of the stylistic trademarks of the Romanian New Wave - the long takes, few cuts, and lack of musical score. But unlike Lazarescu (which is not a comedy, I don't care what people say) and 4 Months, the tone is much less grim. And it does feature music, just not in the sense of a score, there is a great running joke about inept musicians who can't seem to figure out how to play their instruments. In fact, many of the jokes come from the camera movements themselves, as if the camera man can't quite figure out how to work the camera, and is often chided for it by the actors. 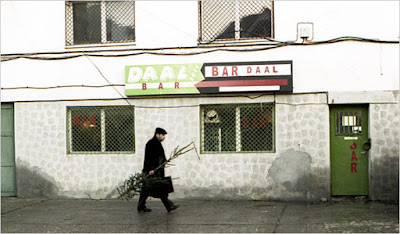 It is also one of the funniest films of 2007, bar none. The humor is dryer than a desert dust storm, but it is incredibly funny. Porumboiu allows the characters quirks to speak for themselves and the humor comes effortlessly. He never forces the humor like many American comedies who overdose on the the quirk. And it also packs a surprising emotional punch, again flowing naturally without any pushing from the director. This is one of the most effortless and relaxed comedies I have seen in a long time. It is finely modulated and brilliantly executed.

Porumboiu takes the idea of memory and nostalgia and turns it into comedic gold. 12:08 East of Bucharest is one of the finest and most accessable of the Romanian New Wave films - it's also the funniest. Filmmakers of the world take note - the Romanians know how to make movies. This may very well be the most exciting film movement of my generation.

Anonymous said…
Nice review. I meant to catch this one in theaters, but I missed it.

I wasn't too hot on Lazarescu, but I loved 4 Months. Every few years it seems like a new corner of the world has a little cinematic golden age and right now it's Romania's turn
3:17 AM