I'm doing a presentation on post-war Japanese cinema to my World Cinema class next week, and I have to choose a film for the class to watch. The teacher is already showing Yasujiro Ozu's Tokyo Story, and my group picks the other one. 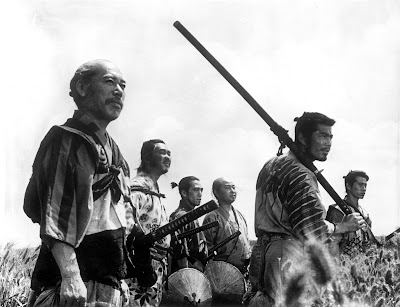 I really want to show Kurosawa's masterpiece Seven Samurai, but students must check out the films from the library and watch them in a tiny library room, and I would feel bad making them sit there for 4 hours. And since they can only check out reserved movies for 2 hours at a time, it seems I should choose something else.

I would show Ozu's Late Spring (my personal favorite Ozu film), but since the professor is already showing Tokyo Story I feel like we should go for some variety. It seems logical, however, that we should show a Kurosawa film and demonstrate his influence on the West.

We will show clips from several films, but only one will be shown to the class in its entirety. Decisions, decisions.

So what do you think? Here is a list of films being considered by the group:
Any input or suggestions you have would be greatly appreciated!

Anonymous said…
My first choice is Ikiru, but under the circumstances and the time constraints I'd go with Yojimbo. It's a bit shorter and the most flat out entertaining of the lot.
1:55 PM

Matthew Lucas said…
We ended up going with "Princess Mononoke." I couldn't convince my group of anything over 10 years old.

I'll be doing plenty of Kurosawa and Mizoguchi in my own presentation.
4:59 AM