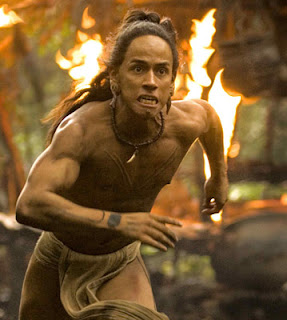 There is much speculation swirling around in Hollywood right now about whether or not Academy members, or for that matter viewers in general, will turn out for Mel Gibson's latest directorial effort, Apocalypto.

As his first film since his drunken, anti-Semitic tirade back in July, Apocalypto will be the indicator of whether or not people will still come see a Gibson film.

However, being that it is an ultra-violent action film told completely in an ancient Mayan dialect, it may not be the best indicator. Many who choose not to see it may do so for reason's other than Gibson himself.

I personally find the whole thing ridiculous. What Gibson said was dispicable, there's no question about it. But the personal views of a filmmaker will never deter me from seeing a film. I disagreed with Gibson's violent, guilt-tripping version of Christianity, but I saw The Passion of the Christ. This article from the New York Times put it best:

The problem posed by Mr. Gibson touches on an age-old question of whether an artist’s personal behavior ought to be a factor in judging his or her work.

The question is not a new one even in the brief history of cinema, which includes people like D. W. Griffith, the visionary feature director whose work fed racist stereotypes; Leni Riefenstahl, whose ground-breaking talent served Nazi Germany; or Roman Polanski, who in 1977 pleaded guilty to having sex with a minor and then fled the country, which did not prevent him from winning the Oscar for best director in 2003 for “The Pianist.”

As Richard Schickel writes in the Dec. 11 issue of Time magazine, “Gibson is a primitive all right, but so were Cecil B. DeMille and D. W. Griffith, and somehow we survived their idiocies.”

I for one think that art should be judged on its own merits. No matter what one feels about Gibson, I think the film should be given a chance. The early reviews have been spectacular, and the previews have been thrilling. No one can deny that Gibson is a talented filmmaker. No matter what his views, I will be there to see his film, and I will judge it seperate from his viewpoint, as it should be.

I can only hope that everyone else can have the maturity to do the same.
Email Post