Category Confusion for "The Departed"

There's always a bit of category confusion this time of year. And the Golden Globes never help (they recently put Little Miss Sunshine's Abigail Breslin in the lead category rather than the supporting, which is what her campaign is for).
The year, Leonardo DiCaprio and Matt Damon are the subject of much debate from The Departed. 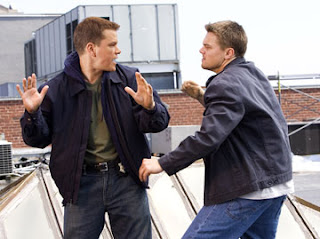 While the drama in the film largely revolves between the parallel lives of Damon and DiCaprio's characters, Warners has remained mum on whether the studio will tout them in the lead category. But it has decided to push Nicholson in the supporting category. In recent awards campaign materials it has simply referred to the four as "The Actors."

The Academy allows its voters to nominate actors in whatever category they see fit. But voters usually take their cues from studio-supplied materials. For "The Last King of Scotland," for instance, Fox Searchlight has urged voters to consider Forrest Whitaker's turn as Idi Amin as a lead role and James McAvoy's young doctor in the supporting category.

But other awards work differently. The Hollywood Foreign Press Assn. makes its own classification of who's a lead and who's supporting for Golden Globes purposes, and it recently deemed DiCaprio and Damon the leads of "The Departed."

The article then goes on to say:

Warners will likely begin showing its hand soon, because if it doesn't, Oscar voters might split their votes for the actors between the lead and supporting categories, leading to no Academy noms at all.

That pretty much hits it right on the money right there. I don't foresee nominations this year for either Leo or Matt, at least not for The Departed. I don't see any love going out to Blood Diamond or The Good Shepherd either. And if there is there is a major danger of vote splitting for both actors. DiCaprio's accent in Blood Diamond also seems to be causing some controversy among its early viewers.
Jack will most definitely be nominated for Best Supporting Actor. How could you ignore a performance like that? But I have a suspicion that he will be the only actor from The Departed to get a nomination. The others are good, the film is excellent, but Jack owns it. Leo and Matt may see Golden Globe noms, but I don't think those will translate over to the Oscars, especially since the Globes split their categories between Drama and Comedy/Musical. It's a competitive year in the acting races, even if the other categories seem wide open. And I think these two will get lost in the shuffle.
I just don't think it's their year.
Email Post