How the Penguins went from Conservative to Liberal 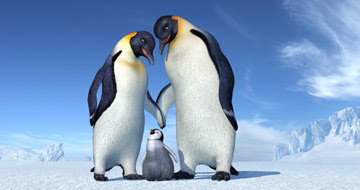 Pity the poor penguins. It wasn't even a year ago that the American religious right, along with their shouty, Tourette-ish brethren at Fox News, decided that the species, then starring in the documentary March Of The Penguins, constituted a standing rebuke to we decadent humans. There they were, poignantly trundling their eggs through ice-blizzard and frigid whiteout, past sundry predators great and small, in the teeth of comically high odds against the eggs ever hatching. Yet, declaimed the righties, the parent penguins' devotion to one another and their determination to hatch that egg, come what may, were the embodiment of Republican family values.

Ah yes, I had almost forgotten about this. Apparently penguins are Republican. It's funny...the right doesn't want us to learn from nature when male sheep start having sex with each other. And they don't mind polluting it up, ignoring global warming, and relaxing emissions standards...but wow look at those penguins! They sure know how to raise a family! I guess they didn't notice that penguins are only monogamous for a year before they move on to another mate. It's a documentary about penguins...there was no ideology to be found.

But listen to this:

But now the penguins can't get a fair shake from the same crowd. This Friday's animated feature Happy Feet, with its cast of Emperor penguins, features a shrinking icecap and depleted fish stocks, and has therefore been assailed as an animated version of An Inconvenient Truth, poisoning the nation's kids with "a political agenda". The tumult of outrage and uproar on the subject proves mainly that it's been a very slow news week indeed.

It's true that Happy Feet does have a message. And a very strong one. It carries with it a very potent message of conservation. Who is destroying the penguins' habitat? The humans, by fishing for way more fish than they need, shaking up the eco system. Who steals Mumble away from his family? Humans. Who is leading the penguins astray with their strict rules and intolerance of those different from them? A government ruled by religion. All penguins are expected to be able to sing. Mumble can't, but he can dance. The tribe doesn't accept him because he's different, and he can't find a mate without singing. But in the end they all learn that dancing is natural and not an "abomination" as the penguin religious leaders call it.

Hmmm...sound familiar? Happy Feet is filled with all kinds of social commentaries. Which is one of the many things that make it so wonderful (it's also very funny and stunningly beautiful). It's a film that does not insult the intelligence of the children - and as such is one of the most refreshing animated films in years.

But the political right is getting up in arms about it, as usual. I've decided that they have nothing better to do, because they always seem to be getting up in arms about something. Heaven forbid a film have a nice moral about tolerance and conservation. And without shoving it down your throat? The story speaks for itself! And it's wonderful! But apparently, conservatives do nothing but sit around and look for things to get offended by.

I love how Patterson finishes his article:

I urge the good pastors of the nativist, snake-handling right to widen their area of examination, amp up the bigotry and get after some of the real deviants who've long dominated the animated universe.

First up: Bugs Bunny, a flagrant naturist, except when he cross-dresses in order to flummox Elmer Fudd (whose querulous voice sounds pretty flaming to the gaydar-deficient righties). And Porky Pig? Have he and his trousers ever been seen in the same room together, Mr Dobson? Better shape up, Porky, people will talk. Foghorn Leghorn - obviously, he's all about the cock. Betty Boop used to lose her frock in the mildest of breezes, that Jezebel. And Mickey Mouse's dog was gay for sure. No, wait, that was Plato, not Pluto.