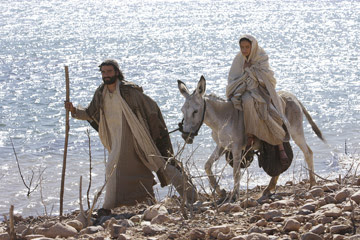 After a soft start, "The Nativity Story" is showing respectable legs at the domestic box office in the days leading up to Christmas, but it's been shunned by moviegoers outside the States. The $35 million New Line pic opened the weekend of Dec. 1 to an unimpressive $7.8 million at 3,083 playdates, finishing a distant fourth to the third frames of "Happy Feet" and "Casino Royale" and the soph sesh of "Deja Vu."

The debut number was viewed as something of a disappointment, given the blockbuster perf by Mel Gibson's "The Passion of the Christ" in 2004 and New Line's marketing of "Nativity" to church groups.

Maybe that's because it isn't any good. Catherine Hardwicke should stick to edgier material...it suits her better.
Email Post