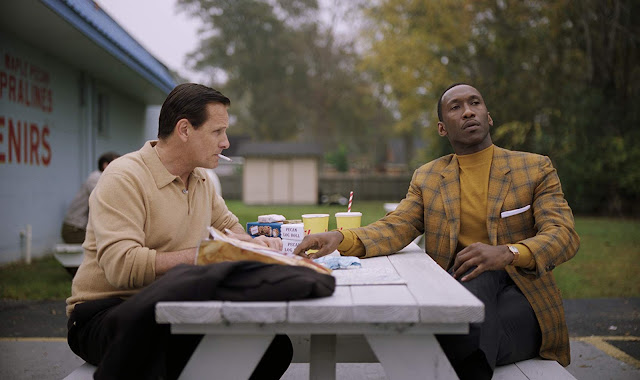 During the early part of the 20th century, black travelers in the American south often travelled with a slim green volume called "The Negro Motorist Green-book," which detailed safe, black-friendly restaurants, hotels, and shops throughout the Jim Crow south. This important piece of African American history has of course been given the Hollywood treatment with a white man at the center of the story. 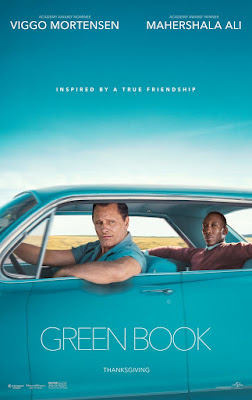 Like a reverse Driving Miss Daisy, with feel-good racial politics straight out the 1980s, Peter Farrelly's Green Book tells the true story of Tony Lip (Viggo Mortensen), a racist tough-guy who is hired to be the driver for black classical pianist, Don Shirley (Mahershala Ali), providing security for the musician's dangerous tour through the deep south in 1962 while using the eponymous Green Book as his guide. Along the way the two form a fast friendship that would last a lifetime, as Lip learns to overcome his own prejudices once he sees the discrimination and outright hostility that Shirley faces at every turn.

On the surface it's a nice story about breaking down walls and washing away deep-seated prejudice. Where it falters is in the simplistic way it tackles these themes. Lip, a no-nonsense Italian from New York, is shocked that the effete and cultured Shirley has never had fried chicken or listened to Little Richard, and insists on feeding Shirley the food and playing him the music "his people." It's set up as a comedic moment, but there's something deeply cringe-worthy about a scene in which a white man essentially teaches a black man what it means to be black based on his own stereotypical assumptions. Lip eventually learns what it really means to be black in America as he witnesses more overt racism first-hand, but Green Book seems to traffic in the kind of feel-good idea that all racism is obvious and malicious, a common mis-conception that allows white people to pat themselves on the back for not being the kind of racist that would make a black person use an outhouse rather than allow them to use the bathroom in their home.

The reality, of course, is much more complex than that; racism is a much deeper issue than hating someone because of the color of their skin. Yet the touchy-feely theme at the heart of Green Book,  that we're all the same color beneath the skin, is the kind of saccharine, surface-level platitude that keeps us from confronting the systemic and often unseen heart of racism, and allows racists to continue to believe themselves to not be racist. 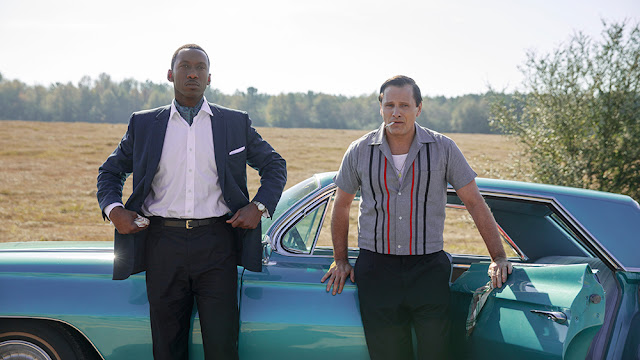 Thematic queasiness aside, Green Book is a slickly made and often affecting film, anchored by two magnificent performances by Ali and Mortensen. But for every moment of genuine emotion, the film comes screeching to a halt thanks to its strangely outdated and often quaint depiction on racism in America. The America of 1962 may have worn its racism more obviously on its sleeve, but just because we no longer have separate facilities for black people and white people doesn't mean that racism has been solved. It's easy to watch a film like Green Book and think "thank goodness things aren't like that anymore." But while things have certainly improved since the 60s, it's dangerous to believe that racism is a thing of the past. It hasn't disappeared, it has simply evolved.

Racism, if you will forgive the expression, is not a black and white issue, and simplistic crowd-pleasers like Green Book only serve to perpetuate that outdated notion. In a year that has given us such complex studies of race in America like Spike Lee's brash BlacKkKlansman, Barry Jenkins' heartbreaking If Beale Street Could Talk, and Travis Wilkerson's incendiary documentary, Did You Wonder Who Fired the Gun?, Green Book feels like a relic, offering a Band-Aid for a wound far too deep to be healed by such surface-level hokum. Its heart may be in the right place, but there's something almost naive, even reductive, in the way it takes a black man's story and puts a white man at its center, insisting that racism is a problem that only a white man with a black friend can solve.