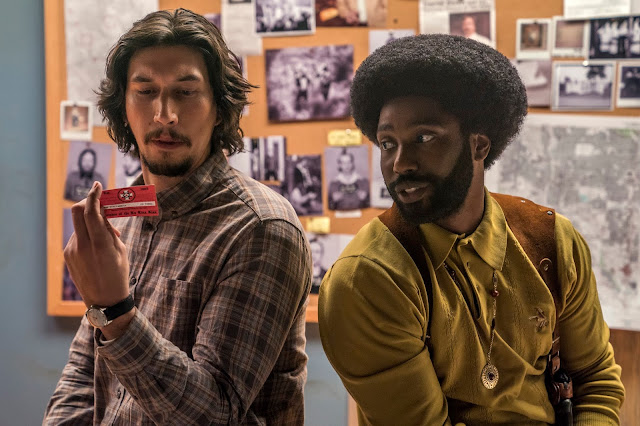 The story of Spike Lee's BlacKkKlansman is so outlandish that it can only be a true story, or as the the opening titles promise, "some fo’ real shit."

In the 1970s, a black undercover detective by the name of Ron Stallworth (John David Washington), who was the first African American to serve on the Colorado Springs Police Force, successfully infiltrated a local chapter of the Ku Klux Klan, even going so far as befriend the organization's Grand Wizard, David Duke (Topher Grace), who was in the process of trying to clean up the group's image in order to make his racist rhetoric more palatable to mainstream society. 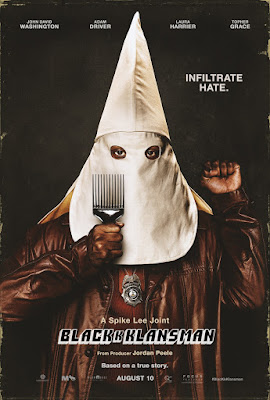 While Stallworth cultivated his relationship with the Klan over the phone, he is represented in person by his partner, Flip Zimmerman (Adam Driver), who had never had to reckon with his own Jewish identity until confronted with the klansmen's unmitigated hate for Jews. Together, they uncover a terrorist plot that threatens the local black community, as a local student advocate group's vocal opposition to white supremacist policies makes them a target for the KKK.

Stallworth went on to write a book about his experiences, which has now been adapted into a ferocious new film by Spike Lee that feels very much like the movie of our moment. BlacKkKlansman is a film steeped in the righteous anger of a man who can't believe that we're still having to fight the same battles in 2018 as we did in the 1970s and beyond. Lee's use of footage from films like Gone with the Wind (1939) and The Birth of a Nation (1915) remind us just how deeply engrained racism and the romanticization of the mythic "lost cause" of the Confederacy are in our culture, dismantling the idea of a post-racial society with a blunt force instrument.

BlacKkKlansman is not a subtle film, but Lee has never been a particularly subtle filmmaker. It is clear that he has neither the time nor the inclination to tiptoe around the issue at hand. This an angry film, a bold work of cinematic sturm und drang that feels like a howl of fury into a raging maelstrom. Lee draws direct parallels to Duke's campaign for a more respectable, less overtly racist KKK to the rise of Donald Trump and the resurgence of white nationalism since the 2016 election, an idea scoffed at by characters in the film that has since become all too real.

This is a radical, impassioned, brilliant work that is as much as essential portrait of our time as it is an historical document. Lee blends action, comedy, drama, and documentary styles into a wildly entertaining and deeply disturbing treatise on America's racist history and our current political climate, borne of a refusal to confront and deal with our own racist past. It is Lee's most crucial statement as an artist, as if it is seemingly the culmination of a life's work of exploring black identity in America. It has the markings of a new American classic, a vibrant and vital portrait of American hate. Rarely has a film been so painful, so raw, and yet so full of life. BlacKkKlansman is unmistakably the work of a major filmmaker working at the peak of his talents, a haunting and harrowing letter to a racist nation that lands with all the devastating power of a nuclear bomb.