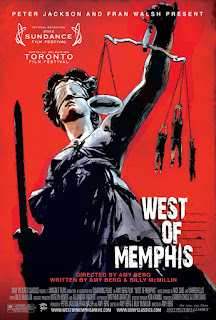 In 1993, three eight year old boys were killed in the Robin Hood Hills area of West Memphis, Arkansas. The case gained widespread notoriety after details emerged that cast doubt on the guilt of the three teenagers accused of the heinous crime, two of whom were sentenced to life in prison, and one of whom was sentenced to death.

The case of the West Memphis Three has been widely covered by filmmakers and journalists over the last 20 years, most notably by Joe Berlinger's Paradise Lost films, the last of which, Paradise Lost 3: Purgatory, was nominated for an Oscar for Best Documentary Feature just last year.

Coming on the heels of the Paradise Lost trilogy, Amy Berg's West of Memphis feels a bit late to the game. But unlike Berlinger's films, it doesn't have a direct agenda. Paradise Lost and its two sequels were directly advocating for the release of the West Memphis Three, with Purgatory having to tack on an epilogue after its premiere to include the release of the three men after the film had been completed.

As such, West of Memphis has the advantage of being able to examine the case from a more outside perspective, looking back on it with clearer eyes rather than directly being a part of it. It explores some of its more intimate details through the eyes of some of its fiercest advocates, from celebrities to some of the victims' family. While one has to wonder just what kind of expert witness Peter Jackson is, it's interesting to hear from some of the wide variety of famous people who lent time and money to the cause. Unlike the Paradise Lost films, West of Memphis spends more time away from the West Memphis Three, and more time exploring alternate theories as to who actually killed those three boys, most notably one of the boy's stepfathers, Terry Hobbs, who was never actually interviewed by the police.

Ultimately, the film is a scathing portrait of a monumental miscarriage of justice. It runs a bit long at nearly 2.5 hours, but it provides a fascinating overview of the case, standing as a final testament to one of the strangest and most mishandled murder trials in recent memory. Berg takes a hard look at a town swept up in paranoia of Satanic cults, who misidentified post-mortem wounds made by animals for sexually motivated ritualistic mutilation, which started a craze that led to three teenagers who just didn't quite fit in. That fear of the "other" holds a lot of blame in destroying the lives of those young men, and the town has never been the same while a real murderer walks free. Viewers who have seen Berlinger's excellent films may feel like they've been down this road before, but Berg has the luxury of not advocating for their release, an event that finally took place in 2011 after years of rallies, court hearings, concerts, and a justice system that just doesn't seem interested in justice. Filmmakers, thankfully, are. And West of Memphis is a compelling chronicle of true crime, paranoia, and a world where justice no longer holds any meaning.