Review | "I Killed My Mother" 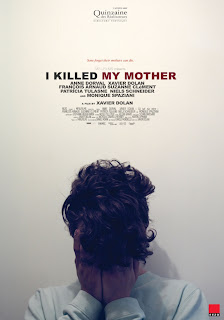 It seems strange to be reviewing a film as a new release nearly 3 years after I originally saw it. 20 year old Canadian director Xavier Dolan's debut feature, I Killed My Mother, made the festival rounds back in 2009 and 2010, garnering quite a bit of attention for the up and coming filmmaker before being picked up for American distribution by Regent Releasing.

When financial problems hit Regent, I Killed My Mother became caught in a kind of distribution limbo, unreleased in the United States outside of festivals while Dolan's sophomore effort, Heartbeats, was released by IFC in 2011 and his third film, Laurence Anyways, prepares for US release this year from Breaking Glass Pictures.

Now, at long last, Dolan's first film comes to American screens thanks to the folks at Kino Lorber, who snatched up the rights from Regent after languishing for years in their back catalogue.

Revisiting the film three years later, having seen the films Dolan has made since, I was still bothered by some of the problems I had with it when I first saw it as part of the RiverRun Film Festival in 2010. I Killed My Mother is obviously a first feature, one that is beholden to its inspirations to an almost self-conscious degree. It is clear that Dolan took a great deal of inspiration from the work of directors like Wong Kar Wai and Pedro Almodovar, whose distinctive styles are written all over the film. Watching the film again, I came out humming the theme music from Wong's In the Mood for Love, which I'm sure is not the effect that Dolan intended. It is as if Dolan didn't quite trust his own style and voice enough yet to step away from the styles of his cinematic idols. Characters frequently walk in slow motion to the same driving waltz, a hallmark of Wong's most famous work, as well as its sequel, 2046. The vibrant color scheme invokes the less campy Almodovar of Talk to Her, and the formalist mise-en-scene even recalls Wes Anderson at times.

In fact, the mise-en-scene was perhaps my biggest initial issue with the film. Dolan's framing, so fussily formal in places, seems strangely sloppy in others. The dinner scenes between Dolan and his mother are especially off kilter, neither centered nor artfully asymmetrical, especially when compared to the style of the rest of the picture. All those criticisms aside, it is hard to ignore the raw urgency of this work. It is a guttural howl of a film, an anguished and deeply personal exploration of the complex relationship between  gay teenager Antonin, (Dolan) and his loving but overbearing mother, Hélène (Anne Dorval). Dolan may not have fully developed his own directorial voice yet, but he uses the language of his forebears to convey a something starkly and disarmingly honest.

At 16, Antonin finds himself hating his mother. He hates the way she looks, the way she eats, the way she talks, everything about her irritates him. The two find themselves at odds about almost every single issue, few conversations go by that don't devolve into a shouting match. It would be easy to write of Antonin as just a spoiled kid, but there's a lot more going on here than that. Hélène clearly loves him, but is also unknowingly selfish in her own way. Neither seem to be willing to compromise, and so the love/hate relationship grows. After accidentally discovering that her son is gay before he has a chance to come out to her himself, she packs him off to boarding school, causing him to resent her even more. So deep seeded is his dislike for her, that when he is assigned to do a report for school on his parents' profession, he lies to the teacher, saying that his mother is dead.

Antonin does not literally kill his mother. The title is a figurative reference to his lie about her death. But perhaps because he was only 4 years older than his character at the time, Dolan delivers a remarkably nuanced exploration of the relationship between a boy and his mother. Right off the bat, he established himself as a talent to watch, displaying a wisdom and an instinct far greater than many directors who've had many more years of experience. There's something disarmingly true about I Killed My Mother, beneath the references to Wong and Almodovar, beneath its almost self-consciously stylish surface, that resonates beyond its characters' histrionics. Both boy and mother are deeply misunderstood. Both remain caught in a strange place between childhood and maturity, unable to live with each other, but yet needing each other more than they know. Dolan navigates tricky emotional waters with a wisdom beyond his years. It's a strong debut from one of cinema's most exciting young talents, and the chance to finally see where it all started shouldn't be missed.