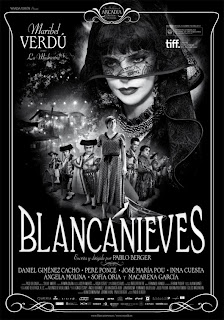 Snow White has been very in vogue over the past year or so. I feel like I've already written these words several times, either in reviews of Mirror, Mirror, or Snow White and the Huntsman, but the story doesn't seem to be going away any time soon.

It is interesting then, that after the aforementioned Hollywood efforts, and the hit ABC television series, Once Upon a Time, that the best of the lot is far and away Pablo Berger's Blancanieves, which not only encompasses the recent popularity of the Snow White tale, but the rather surprising resurgence of silent film. I thought the critical and popular success of The Artist would be a one-off fluke, a novelty as quickly embraced as it would be forgotten. But something has taken hold in the minds of filmmakers, a reawakening perhaps of the freedom that silent film represents. Miguel Gomes embraced the medium in the second half of his remarkable film, Tabu, which while not fully silent, hearkened back to the pioneering spirit of the silent auteurs. 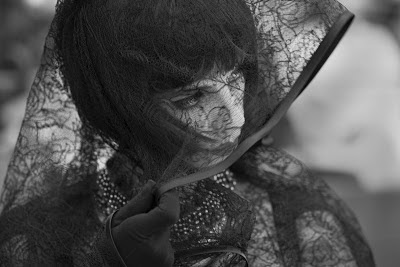 The Artist, on the other hand, felt more like imitation than emulation, a pleasant re-creation of a lost artform that felt completely false. As charming as it is, it felt like a gimmick, mimicking the style of silent comedies but failing to capture their essence. That is what is so refreshing about Blancanieves. Berger clearly gets it. He isn't just playing silent film dress up like a little kid putting on a Charlie Chaplin costume and dancing around with a cane. He takes the silent medium and uses its artistic possibilities to his advantage, growing within the medium and pushing it in new and thrilling directions. In so doing it feels more like an authentic silent film than anything else we've seen in quite some time (not counting the films of Guy Maddin, who will always be the undisputed modern silent master).

Blancanieves also updates the Snow White tale into something a bit unusual. Set in Spain during the 1920s, the film takes place in the world of bullfighting. Our Snow White is Carmen (Macarena García), whose father, Antonio Villalta (Daniel Giménez Cacho), is the most famous matador in all of Spain. When he is paralyzed during his final fight, and his wife dies in childbirth soon after, he is seduced by a gold-digging nurse named Encarna (Maribel Verdu), eager to gain access to his vast fortune. She keeps the invalid Villalta secluded in his bedroom in his expansive mansion, and banishes young  Carmen to the stables, where she is little more than a servant in her own home, her father believing her dead along his with his late wife. 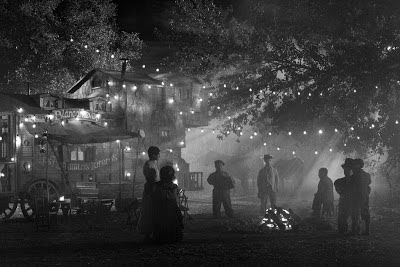 While Encarna busies herself spending Villalta's fortune on flashy clothes and wild flings with other men, Carmen sneaks into the house one day and discovers her father, whom she believed to be dead, is still alive, and the two form a strong bond together in secret. When Encarna learns of this she sets out to have them both killed. Carmen escapes, of course, and ends up with a traveling band of bullfighting dwarves, a novelty circus act that she is eager to join. Robbed of her memory, she no longer knows who she is. So the dwarves christen her Blancanieves (Snow White), after the legendary fairy tale. Soon the whole country has heard of the female matador, Blancanieves, carrying out the legacy of a father she can no longer remember. It isn't long before Encarna gets wind of this new bullfighting sensation, and becomes determined to do away with Carmen and seal her hold on the family fortune once and for all.

It's a refreshingly bold and unique take on a tale that has very nearly been run into the ground, but Berger makes it feel fresh and new again. Even with its silent surroundings, Blancanieves feels as vibrantly contemporary as much as something out of another era. It certainly captures the look and feel of the silent era, complete with gorgeous black and white cinematography by Kiko de la Rica and a lush score by Alfonso Vilallonga. Not to mention the fact that Maribel Verdu is far and away the most terrifying of the evil queens without ever saying a word. But like the very best silent films, it never feels confined by its lack of dialogue. Berger finds a kind of artistic liberation in the exploration of film as a purely visual medium, and the result is the kind of rare cinematic treat that makes the heart beat faster at the recognition of something truly magical in the way that only movies can provide.