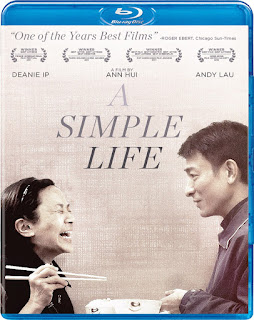 The beauty of Ann Hui's A Simple Life lies in, you guessed it, its simplicity. In the year when Michael Haneke's Amour garnered critical accolades left and right, culminating in a Best Picture nomination at the Academy Awards and a win for Best Foreign Language Film, another, much warmer film about aging slipped quietly under the radar.

A Simple Life is not on the same level as Amour. But after Haneke's much more austere, bleak vision of old age, A Simple Life feels like a warm hug. Rather than depicting the horrors of old age, it focuses instead on the potential for joy and friendship at life's end after a dedicated life. Beauty can be found even in the darkest of situations, and Hui's more upbeast, optimistic take on aging is something to be cherished. Like its title suggests, it revels in the simple pleasures of life for a woman who asks for nothing but deserves everything.

For the past 60 years, Ah Tao (Deanie Yip) has taken care of Roger's (Andy Lau) family. As both maid and nanny, she has run the house, prepared their meals, and raised their children. Roger is the 3rd generation, and a successful movie producer with little time for home or family. Now well into her 70s, Ah Tao has a stroke, and it becomes clear that she can no longer take care of Roger the way she once did. So Roger makes a difficult and courageous decision - he decides to put his career on the back burner and care for Ah Tao himself. What happens is a unique and touching reversal of roles, in which Roger becomes the caretaker for Ah Tao. Her unassuming and modest ways lead her to refuse him paying for anything, but when she moves into a retirement facility for senior citizens much more incontinent than she, Roger begins to devote his life solely to her, in much the same way she devoted her entire life for caring for him.

A Simple Life is a lovely and tender film, and while its premise is rife with potential for sentimentality it remains remarkably restrained, as unassuming as Ah Tao, avoiding maudlin cliche with a wise and even hand. The lead performances by Deanie Yip and Andy Lau are both terrific, never going for obvious emotions, keeping their feelings close to the chest. Ah Tao and Roger never need to vocalize their feelings for each other - they simply know. By the end, they have not only become each other's closest friend, but each other's closest family, and Roger is the son she never had. Like Amour, it is a film about the people who will be with us when the time comes, but rather than focusing on the pain of love, it focuses on the beauty. The Blu-ray presentation by Well Go Entertainment is bare bones, but really no special features are needed here. The film speaks for itself, and it's one of the most criminally overlooked gems of 2012.