Review | "Beyond the Hills" 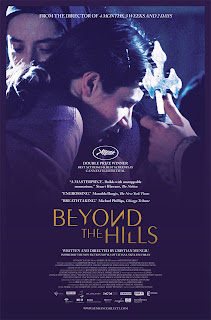 Near the end of Cristian Mungiu's Beyond the Hills, a policeman looks at a colleague and asks "when will this winter end?"

It is clear that while the policeman may be referring to the weather, Mungiu certainly is not. Never one to bash us over the head with metaphor, he nevertheless underlines his point in the film's chilling final shot, a haunting, slow zoom long take that lingers long after it fades.

The best films of the Romanian New Wave have a way of getting under one's skin, gnawing and penetrating with a slow-burn intensity. When the renaissance of Romanian filmmaking first announced itself to the world sometime around 2005-2006, with the release of Cristi Puiu's The Death of Mr. Lazarescu, Corneliu Porumboiu's 12:08 East of Bucharest, and Radu Muntean's The Paper Will Be Blue, it was clear that something major was going on in the former Communist nation. The movement peaked in 2008 with the release of Mungiu's masterpiece, 4 Months, 3 Weeks, and 2 Days, which remains its strongest and most widely acclaimed achievement, and is notable for helping to revise the foreign language film rules at the Academy Awards after it was infamously left off of the Best Foreign Language Film shortlist in 2008.

There have been some strong Romanian films since then, most notably Porumboiu's Police, Adjective, Muntean's Tuesday, After Christmas, and Puiu's Aurora. But Mungiu had perhaps the highest expectations riding on him to carry the movement's torch after establishing himself as its standard bearer. His omnibus film, Tales from the Golden Age, was never released in the United States, and received mixed reviews at the Cannes Film Festival. But Beyond the Hills is the strongest Romanian film since Mungiu's own 4 Months, 3 Weeks, and 2 Days. In that film, Mungiu tackled the thorny issue of abortion in a stark and clear-eyed way. Not one to avoid hot button topics, Mungiu turns his eyes to religious orthodoxy in Beyond the Hills, setting the film in a remote convent in the hills of Romania.

Shades of Michael Powell and Emeric Pressburger's Black Narcissus haunt the isolated monastery, drained of color and music, perhaps, but not necessarily in intensity. Mungiu takes the trademark Romanian austerity and takes it a step further, infusing it with an electrifying undercurrent of creeping madness, as a young woman named Alina visits her childhood friend, Voichita, at the convent who has dedicated her life to becoming a nun. It is clear from the start that this was no ordinary friendship. While it is never explicitly stated, it becomes clear the two shared a special and unique bond that might have even been a romance. But Voichita has turned from that life, even as Alina begs her to leave the convent and return with her to Germany.

Having grown accustomed to monastic life, Voichita refuses. Tormented by memories and unwilling to give up on what they had, Alina slowly begins to lose her grip on her sanity. The nuns try to intervene, accusing her of a multitude of sins, demanding confession and penance. When that doesn't work, they turn to medical help. When that doesn't seem to help either, they take matters into their own hands, but the results may not be the outcome they're looking for. What follows is a gripping exploration of the nature of sin. The Romanian Orthodox church lists 464 possible sins, all of which the sisters force Alina to go through to discover the source of her trouble. Each one as specific and restrictive as the first; no questioning, no thought of one's own. But at what point does individual thought become a crime? The sisters are obsessed to the point of pathology with absolute conformity, completely missing the point of the spiritual and personal nature of their religion, and giving little thought to how to apply it in their every day life.

So concerned with their crusade against the speck in their neighbor's eye, they end up missing the log in their own. And it's a very big log, one that, in the end, they remain quite unaware of. Which leads us back to the policeman's final statement - "when will this winter end?" The members of the convent fail to recognize the evil within in their quest to locate it in others. In the end, Mungiu confronts us, the audience, with the same question posed by the policeman. What good is a strict adherence to rules with no comprehension as to why? And when will the seemingly never ending cycle of blame and fearmongering end? These women are afraid of evil, and afraid of the consequences if they do not obey to their strict set of rules. But rules for the sake of rules without a basis in faith and love over fear and blame ultimately lead to their downfall. Mungiu deftly ratchets up the tension to a fever pitch in a way we've never quite seen from a Romanian film. It combines the sexual tension of Black Narcissus with the religious fervor of Carl Dreyer's Ordet, exploring the nature of modern fundamentalism with the eye of a consummated craftsman. His very specific brand of formalism traps the characters in a theological prison of their own design, and the results are as fascinating to watch as they are painful. Mungiu has established himself as the undisputed master of the Romanian New Wave, and with the release of Beyond the Hills it is clear that Romanian cinema isn't going anywhere anytime soon.