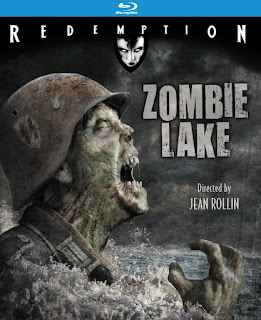 After directing 1981's Zombie Lake, it's pretty safe to say that Jean Rollin discovered that zombies just aren't as sexy as vampires. 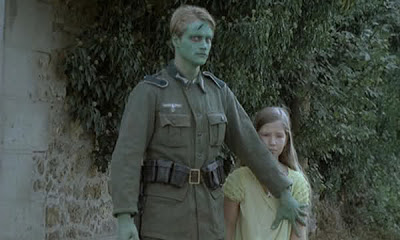 It's clear even distributor Kino Lorber, who has done an excellent job releasing Rollin's filmography on blu-ray over the last year, doesn't particularly have a lot of faith in the film either. It's the first Rollin title not to include a booklet of liner notes by Video Watchdog's Tim Lucas, which have helped illuminate the often disarming depths of Rollin's work, which could easily be dismissed as nothing more than Eurotrash horror for those who aren't looking beneath the surface. There are a few extras here, mostly some alternate versions of scenes, but it lacks any kind of contextualization that has made these releases such a pleasure in the past.

Nazi zombies were a peculiar subgenre of the zombie films in the 1980s, and Zombie Lake might possibly be one of the strangest ones. It starts off, in typical Rollin fashion, with a naked woman going swimming in a cursed lake, only to be attacked by an underwater zombie. It's almost a direct rip-off of the opening of Jaws but with actual nudity. This sets off an investigation into the lake, which yields and extended flashback, telling of how members of the French Resistance once slaughtered a group of German soldiers during World War II and tossed their bodies in the lake. Now, they have returned from the dead for revenge. Oddly enough, one of the zombies comes across his young daughter, whom he fathered with a local woman after saving her life. 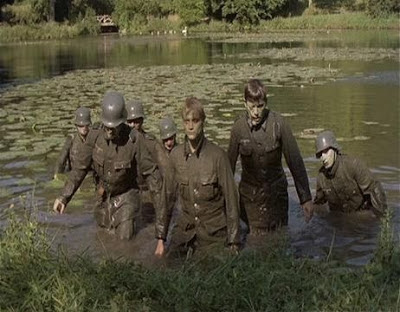 The transfer looks fine, but isn't anything spectacular. Not as good as some of ther Rollin releases, anyway, which have provided some rather strong HD upgrades.  There are a few interesting visual ideas at work here, but the story is just too silly to be saved. There are plenty of bad horror movies out there, Rollin even made quite a few himself. But Zombie Lake lacks that certain spark that makes even bad films entertaining. Rollin made much stronger, and much more frightening films in his career, to which Zombie Lake is little more than an unfortunate footnote.