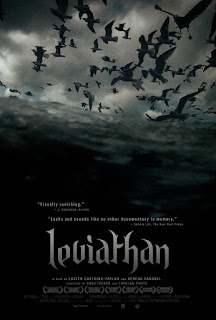 Every now and then a film comes along that changes our perception of cinema itself; that expands the definition of what a film can be. A film that pushes boundaries, that makes its own rules, that rewrites the cinematic language in such daring and thrilling ways as to completely redefine what it means to be a film.

Such is the case with Véréna Paravel and Lucien Castaing-Taylor's extraordinary documentary, Leviathan. However, to call it a documentary is almost a misnomer. In fact there's really no label for it that quite fits, because no other film quite compares to it. It's an incredible work of nonfiction filmmaking, to be sure. But it also casts aside traditional form and structure in favor of something entirely its own. You'll find no interviews, talking heads, or even dialogue here, just the story of the New England fishing industry as captured through a series of unforgettable imagery on cameras manned by the filmmakers, by the fishermen, and even attached to tethers and tossed overboard.

To call Leviathan's spatial sensibility unique would be an understatement. There are times when the camera doesn't even seem to be attached to anything, but a free-floating entity all its own, rolling with the waves and moving up and down with the boat's seemingly endless machinery. There is no music in the film; the clinking chains, groaning pulleys, surging waves, and cawing gulls make up their own symphony of the seas to accompany the weirdly gorgeous imagery. Paravel and Castaing-Taylor (who also directed the lovely sheep-herding documentary, Sweetgrass) manage to get their cameras into places one would never think possible. The effect is equal parts disorienting and mesmerizing, creating an abstract portrait of an industry as old as humanity itself, that has provided mankind with a reliable food source since the beginning of recorded history. It is that timeless and almost ancient quality that drives Leviathan, the sense that we are watching a process that has been repeated over and over throughout the ages. While the technology may have changed, the essence of the task remains the same.

The film is dedicated to the memory of fishing vessels that have been lost off the coast of New England, a sobering reminder of the dangers of the job. And indeed, at times the film's dark, grainy beauty can be deeply unsettling. The use of digital video rather than actual film gives it a sense of gritty mystery, both beautiful and oddly sinister, as if potential danger lurks just around every corner. Paravel and Castaing-Taylor's use of editing to create narrative momentum out of seemingly disconnected images is simply incredible, almost evoking a kind of Soviet Montage aesthetic that crafts a nearly wordless narrative; the rhythmic cuts coupling with the indelible images to stunning effect.

Near the end of the film, in one of its most jaw dropping sequences, the camera is tossed overboard on a tether, skipping along on the waves, plunging into the sea before being yanked up again. Sky becomes water, water becomes sky, until one becomes indistinguishable from the other. It is a breathtaking melding of the elements, and in a way, it sums up the entire film. Even the men who populate the fishing boat somehow become part of the landscape, everything works in perfect symmetry, sunup to sundown, creating the natural ebb and flow of life at sea. In this collision of man and nature, the line becomes hauntingly blurred. Despite the fact that we never really hear from these men outside of occasionally barking orders at each other, it's strangely intimate and alluring, up close and personal in an unexpected way. It is as if we are there on that ship, experiencing it all as if in a dream. There's simply nothing else out there like it, and its timeless, almost supernatural urgency is truly spectacular.

Leviathan is a bracing aesthetic achievement, bar none, brilliant in both construction and execution. There is something deeply primal about what Paravel and Castaing-Taylor have achieved here, the kind of film one walks away from realizing they have witnessed something truly special. It is a wholly original sensory experience, a once in a lifetime documentary that transcends the medium and revolutionizes the form. It may be a tough sell for those expecting something more traditional, but what great work of art isn't? Come prepared to surrender to one of the most singular and astonishing films in years, because there has never been anything quite like this before.