Blu-ray Review | "The Life and Death of Colonel Blimp" 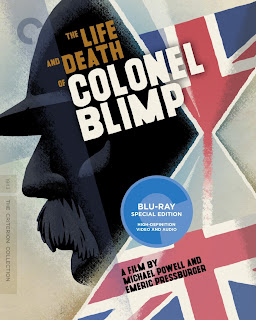 Considered by some to be the greatest British film ever made, Michael Powell and Emeric Pressburger's The Life and Death of Colonel Blimp has at long last been given the Blu-ray treatment it deserves by The Criterion Collection.

Known jointly as The Archers, Powell and Pressburger's filmography together is staggering, remaining nearly unparalleled in the history of cinema. The Red Shoes, Black Narcissus, A Matter of Life and Death, I Know Where I'm Going, A Canturbury Tale, its an impressive oeuvre that any filmmaker would be envious of. While I might personally give the edge to The Red Shoes, it would be hard to argue with The Life and Death of Colonel Blimp as their finest achievement.

Released in 1943 at the height of World War II, the film very nearly didn't get made at all. The British war office refused to release Powell and Pressburger's first choice for the title role, Laurence Olivier, which lead them to Roger Livesey, who was something of a rival of Olivier's at the time.

The film is loosely based on an old British cartoon character, an aging, rotund military brass with a giant gray walrus mustache who was always portrayed as a kind of buffoon, a clueless member of an aging high command with little grasp of how the modern word works. But The Life and Death of Colonel Blimp is no comedy, nor is it meant to be satirical in anyway. Certainly Major General Clive Candy, the Colonel Blimp of the story, looks the part, and has become disconnected to modernity in his old age, but rather than treat him as an object of ridicule, they treat him as a human being as deserving of respect and dignity. When the film begins, we are in the heat of WWII (which, at the time of the film's release, would have been the present day), and Candy has ordered a military drill for the home guard to begin at midnight. Against orders, they invade his headquarters and take him prisoner, claiming that the enemy wouldn't wait until midnight, so why should they? Candy is aghast at such insolence and disregard for the rules of war.

The film then flashes back 40 years. It is 1902, and Candy has just returned from the Boer War. No longer the spluttering old man pontificating about the rules of war, Candy is a dashing young war hero who doesn't have much use for authority himself. He's a fun loving prankster, whose jokes eventually lead him into a duel with a German soldier, Theo (Anton Walbrook), ends up becoming a lifelong friend (a thinly veiled representation of Powell's own friendship with the German Pressburger). It is in that duel that Candy gets a scar on his upper lip, leading him to grow the iconic mustache to cover it up. What follows is 40 years in the life of a soldier. His friendship with Theo, and his love for a woman he can't have (represented by three different women, all played by the ravishing Deborah Kerr). Along the way we discover how he became this cartoonish character, and find humanity deep within a man that the younger generation has failed to appreciate. He was, after all, just like them once upon a time. And The Life and Death of Colonel Blimp honors his lifetime of dedicated service.

There's something decidedly elegiac about the film. It's a heartbreaking study of aging and obsolescence in the face of modernity, but also a paean to a generation of heroes. Candy is facing an enemy he doesn't understand, an enemy that refuses to play by the rules and threatens to engulf the world. The world has indeed changed, but not for the better. Candy is a relic from a simpler time, but here he is not a man to be put out to pasture, he is a man to be honored and thanked, even as the world marches on. It is said that the film's view that strict adherence to traditional warfare would lose Britain the war cost Powell and Pressburger their knighthood. While not forbidden to make the film, they were strongly encouraged not to. It's interesting watching the film now, knowing that the British government considered the film unpatriotic, when nothing could be further than the truth. Candy's methods may be outdated but the film itself is a celebration of the British spirit.

Criterion's gorgeous Blu-ray presentation is absolutely stunning. They did a brilliant job with The Red Shoes and Black Narcissus, and Colonel Blimp is no different. In fact it's so clear that some of the excellent makeup work has become more apparent than it was on the DVD release. Powell and Pressburger have long been an inspiration to Martin Scorsese, who provides a loving introduction here, as well as a demonstration of the film's meticulous restoration. Thelma Schoonmaker, Powell's widow and Scorsese's longterm editor, also appears in a 2012 interview called "Optimism and Sheer Will." While most of the features are repeats from the original Criterion DVD release, the HD transfer is such a marked improvement that this is a must have disc. It's a sprawling and magisterial look at all of life's great loves, adventures, and follies. Old age awaits us all, and The Life and Death of Colonel Blimp is a deeply moving look at the experiences that make us who we are.