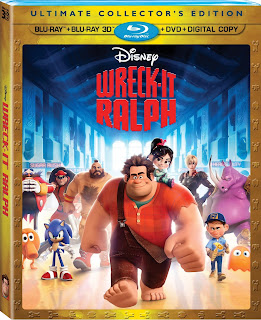 When Brave's name was called out as the winner of this year's Academy Award for Best Animated Feature, many greeted it as something of a surprise. It's hard to imagine a win by Pixar being an upset, but many (myself included), thought the award would end up with either Tim Burton's Frankenweenie or Wreck-It Ralph.

Strangely enough, Brave was the weakest in an unusually strong field. And while I was pulling for ParaNorman, one of my favorite films from last year, to take home the gold, I would have been perfectly happy to see it end up with Wreck-It Ralph.

All too often, kids movies play paint by numbers with their plots, throwing in just enough goofy pratfalls to keep the kids laughing, but never bothering to actually be a good film in their own right, let alone one that parents can enjoy too. But with Wreck-It Ralph, Disney decided to go for something more, and they succeeded.

It's an undeniably creative premise - Wreck-It Ralph (John C. Reilly), a Donkey Kong-esque video game villain, has grown tired of always being the bad guy, wrecking a building like Sisyphus for 30 years while the game's hero, Fix-It Felix (Jack McBrayer) repairs it and reaps all the glory. Ralph just wants to be the hero for once, so he heads to the new first person shooter game, "Hero's Duty," to win a medal so he will finally be accepted as an equal by his fellow video game denizens. While in the gamer, however, he inadvertently releases a vicious bug, a virus that doesn't know it is in a video game, that could destroy the entire arcade. He ends up in "Sugar Rush," a girly racing game, where he befriends Vanellope (Sarah Silverman), a perky racer and fellow misfit, who is an outcast in her game for a glitch that causes her to dematerialize at random.

The two of them form an unlikely bond after Vanellope swipes his medal to use as an entry fee into the race. Ralph vows to help her build a go-cart so she can fulfill her dream of becoming a racer in her own game. But someone doesn't want her to enter the race - someone who is willing to do anything to suppress Vanellope and hide an explosive secret that could change the entire game. And if you die outside your own game, you don't get another life.

What makes Wreck-It Ralph such a unique pleasure is its evocation of classic arcade games, making its behind-the-scenes tour of the arcade's inner workings a kind of Toy Story of video games. It's a treat, especially for those who grew up with these video games to see cameos by classic characters from "Pacman," "Sonic the Hedgehog," and "Street Fighter." But it also puts Ralph in the middle of a very real identity crisis, going beyond the usual "anyone can achieve anything" platitudes of kids movies and striking a balance between achieving one's goals and accepting one's own identity. There's a surprising amount of thematic meat here, some of which might go over kids' heads, but its an important lesson nonetheless. Director Rich Moore, whose previous directorial efforts have all been on television, never bludgeons over the head with the message either, instead giving us a smartly crafted and highly entertaining film that is as pleasing for children as it is for adults.

Disney's Blu-ray presentation conforms to their usual high standards, although it's a bit disappointing to discover that the 4 discs of the "Ultimate Collector's Edition" are held on only two knobs, two discs per knob, which seems like it could increase the potential for damage to the disc. The best extra is, of course, this Oscar winning animated short film, Paperman, which played in front of the film in theaters last Fall. It's a cute film, not as strong as some of the other nominees, perhaps (most notably Adam and Dog), but its charm is irresistible nonetheless. Being a computer animated film, it looks even more jaw-dropping in HD, and the often breathtaking detail comes to life here as never before. A requisite behind the scenes featurette fills out the features, along with a Disney Intermission feature that takes viewers on a deeper look into the making of the film when you hit pause, which will probably be of most interest to the grown ups in the audience. If you have kids, or enjoyed this film in theaters, picking this one up is a no-brainer. It's a strong presentation of an equally strong film.