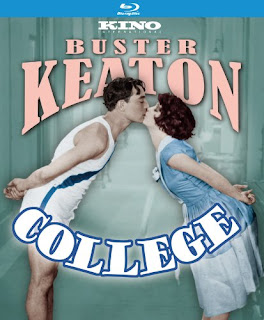 Sandwiched in his filmography between The General and Steamboat Bill, Jr., arguably the largest scale and most accomplished comedies of his career, Buster Keaton's College has the unenviable position of sitting in the shadows of his two greatest masterpieces.

While it is certainly a much lower key film than either of those two, College actually holds up remarkably well, showcasing Keaton's more subtle brand of humor, and standing out as one of his most accomplished smaller scale comedies.

As its title implies, College finds Buster Keaton graduating from high school and heading to college. A bookish nerd with no time for sports, Keaton's valedictorian address pooh-poohs the very idea of athletics, insisting that if young men wanted to make anything of themselves they should focus on developing their minds rather than their bodies.

Unfortunately for him, the girl he loves wants an athlete, not a scholar. So Buster follows her off to college, determined to prove to her that he's not as arrogant as he seems by trying every sport he can possibly think of. The results are predictably hilarious, with Keaton trying everything from baseball to discus (the baseball scene is especially inspired), before finally bumbling into a position on the rowing team, where he is finally able to combine mental acumen with physical skill in a thrilling race to the finish line.

College is a veritable showcase of Keaton's deadpan sight gags, with each pratfall and mishap made all the more funny by the actor's constantly stony visage. Naturally, Keaton is just playing yet another variation on the same character he always played, the hapless mama's boy who just can't seem to catch a break, but he was the best at it, and this is why. Even though age-wise he's not convincing as a brand new high school graduate, his guileless, awkward charm makes up for it. Although he was much less sentimental than his contemporary, Charlie Chaplin, Keaton displays an earnestness here that is possibly as close to sentimental as he ever got.

With the film's new Blu-ray release, Kino Lorber has finally finished out their impressive HD upgrades of Keaton's most famous features and shorts. It's truly an impressive collection, and the final installment doesn't disappoint. In addition to a strong, crisp image, the disc also includes a commentary track by historian Rob Farr, and most notably a 1966 industrial short film that is widely considered to be Keaton's final screen performance. The latter will be of special interest to Keaton's fans, even if the film itself is a bit of a sad farewell to one of the cinema's greatest icons. Kino has done a fantastic job with these films, and College is no exception. Keaton helped write the textbook on comedy, and in College he gives us a master class.