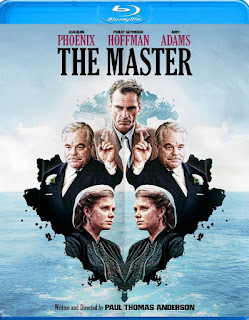 No other film from 2012 has stuck with me, haunted me, or frustrated me quite like Paul Thomas Anderson's The Master. It is the kind of film that one walks away from on first viewing convinced they've seen a masterpiece, even if they're not quite sure why. It is certainly a film that opens up upon repeat viewings, its Rorschach blot structure coming into clearer focus after multiple visits. It is not an easy text to approach, it's a challenging, often maddening film very much by design.

In my original review I wrote:


While "The Master's" fractured narrative can be an often maddening experience, it is clear that what we are watching is something special indeed. So staggering is Anderson's vision that there is no way a single viewing could ever yield its full riches, and I'm confident that this is a film that critics and historians will discuss for years to come. It's a searing portrait of post-war ennui through the eyes of a man whose fierce individualism comes into direct conflict with his innate need to be led. Quell craves guidance, but he also wants to forge his own path.

Revisiting The Master on Blu-ray is a somewhat different experience. Anderson's gorgeous, 70 mm images (courtesy of cinematographer Mihai Malaimare Jr., who should have been nominated for an Oscar) take on a more intimate hue when viewed on a smaller screen. The processing scenes between Philip Seymour Hoffman's Master and Joaquin Phoenix' Freddie Quell become even more gripping and personal. There is something especially alluring about the closeness of them. On the big screen they are larger than life, on the small screen they are in our living room, and the depth of these two electrifying performances is all the more apparent. 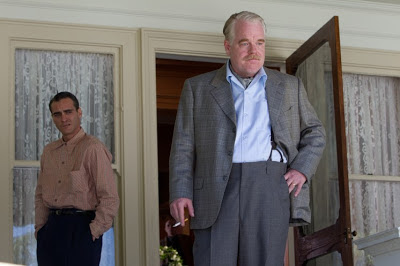 Upon first viewing, it is easy to get lost just trying to make sense of the whole thing. But revisiting on Blu-ray allows the viewer more time to digest and dissect it, to experience it anew. There's something more easily digestible about it the second go-round. And while I'm convinced that it is the sort of film that will continue to yield fresh rewards each time it is watched, the scope of its achievement is readily apparent. The HD transfer on the Blu-ray is stunning, but the special features are perhaps even more obfusticating than the film. The deleted scenes almost feel like their own short film when strung together and scored by Jonny Greenwood, they become their own sort of separate narrative that actually illuminates some points from the film. In typical Anderson fashion, however, they also raise new questions. The behind the scenes featurette, on the other hand, doesn't really shed any light on anything, featuring a series of clips filmed by crew members between takes that seem to show a whole lot of nothing going on. Perhaps of most interest is John Huston's 1946 documentary, Let There Be Light, which illuminates the troubles of soldiers returning from World War II suffering from Post Traumatic Stress Disorder. It is a fascinating change of pace from the usual jingoistic military docs of the time, and offers some chilling insight into an often overlooked problem.

As for the film itself, it's hard to imagine it looking any better than it does here, the 1080p presentation making a gorgeous film even more impressive. It's not a film for everyone, nor was it meant to be. But it's a mesmerizing experience nonetheless. I ended my original review by saying:


It's also very clearly a major work, a film filled with ideas of such thematic grandeur that one must step back from it in order to truly view the full picture. Its prismatic structure looks at its subject as though through the lens of a diamond, splitting into fragments and congealing into a brilliant but fractured whole. It is left to us to reassemble the pieces. Such a work is bound to leave many audience members cold, and it's not difficult to see why. But it's also fascinating to contemplate. It is a film that is impossible to ignore; a bold, towering work that is as infuriating as it is masterful.

I stand by every word, perhaps now even more so. This is a film to be revisited, reflected upon, and remembered. There's a lot to explore beneath its surface, and now on Blu-ray it can truly be appreciated in its best possible presentation.