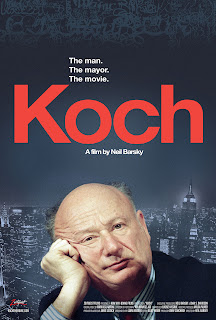 It is strangely fitting that former New York mayor Ed Koch passed away on the day that Neil Barsky's admiring documentary, Koch, was released in NYC on February 1st. After all, Koch was a man who was both fiercely protective of and invested in his legacy.

Of course Koch's legacy will reverberate beyond this documentary, but there is a certain elegiac quality to Koch that feels as if it was finished after he was already gone.  If the film is any indication, then the former mayor has nothing to worry about - his legacy is in good hands.

Naturally that legacy isn't without controversy, and Koch admirably explores the thoughts of some of his detractors as well. Koch has been in the spotlight quite a bit lately, making appearances in the documentaries The Central Park Five and most memorably, How to Survive a Plague just this past year.

Koch actually rebuffs some the accusations that he ignored the AIDS crisis leveled at him by members of ACT UP in How to Survive a Plague, by painting him as an early champion of gay rights, actually running on some gay rights platforms at a time when such things were almost unheard of. Koch's sexuality was long a topic of speculation even during his initial mayoral campaign against Mario Cuomo in 1979, which lead to many in the gay community feeling betrayed by him as AIDS ravaged the gay male population during the 1980s. If Koch was gay, he remains defiantly in the closet here with a brusque "none of your fucking business." Even in his twilight years, Koch was a firebrand, yet still takes the time to detail the steps he took to try and curtail the spread of AIDS at the height of the epidemic. It's interesting watching Koch on the heels of the Oscar-nominated How to Survive a Plague, and noting the different approaches taken by their respective filmmakers. Barsky takes a much more even handed approach than Plague's David France, who turned the film into an angry polemic that refused to examine the negative effects of the members of ACT UP.

The AIDS crisis is not the focus here, however, but it is interesting to note the difference in the two films. Barsky is clearly in Koch's corner, but this is not a one sided adulation. Barsky gives voice to Koch's critics, examining the most important moments of his time in office from all sides. Perhaps his most lasting legacy will be his housing projects that distinguished him as one of New York's most progressive mayors, despite accusations of racism that popped up early in his career. The older Koch waves off such talk with his usual bluster. A principled and outspoken man to the last, Koch always called it like he saw it, with his typical no nonsense chutzpah. Koch may follow a pretty typical structure for a biographical documentary, but Barsky handles it well, balancing the story of Koch's mayoral career with modern reflections from the man in winter. It isn't really any more illuminating beyond the history we already know, but it humanizes the man in a way rarely seen in the national media. Love or hate the man, he is a fascinating figure. In Koch, he gets the chance to defend himself. You may not like what he has to say, but you can't help but respect the zeal and conviction with which he says it.