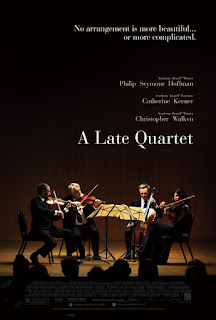 Everything about Yaron Zilberman's A Late Quartet exudes taste and prestige. Inspired by Beethoven's Opus 131 String Quartet in C-sharp minor, the film not only incorporates the piece into its plot, it completely structures itself around the movements of the music. The result is a somewhat unique ensemble drama that is ultimately takes itself a bit too seriously.

A Late Quartet centers around a famed string quartet whose future is threatened when its founding member, Peter Mitchell (Christopher Walken), discovers that he has Parkinson's Disease, and that his days of playing the cello are numbered. This opens up a Pandora's box of issues for the group, as old wounds and unspoken rivalries begin to rear their ugly heads, adding rifts to already strained relationships. Married couple Juliet (Catherine Keener) and Robert (Phillip Seymour Hoffman) find their relationship put to the test by Robert's infedilty, while lead violinist Daniel (Mark Ivanir) begins a relationship with their daughter, Alexandra (Imogen Poots).


It's a bit of a soap opera, yes, but a classy one. The real highlight is the performances, especially Walken's. Walken has become such a parody of himself later in his career that it's completely disarming to see him in such a serious role. It's a nice reminder of what a fantastic actor he really is. Walken nails the sad resign of a man bidding farewell to the career he loves and the legacy that he built from nothing. It's a beautiful, even haunting performance that gives a soul to an otherwise restricted film. The film is almost held captive by its good taste. It's so precise, so carefully planned, that it almost comes off as unnatural. Zilberman's adherence to the premise, and by default the mathematical purity of musical composition leaves little room for exploration.

By the time the quartet takes the stage for their final performance, the harmony each player brings to the piece is stunning. A little more of that kind of restrained elegance and musical beauty may have freed the film from its somewhat stifling atmosphere. It's almost too perfectly constructed for its own good, so much so that the story is unable to breathe. The characters are interesting in and of themselves, but the narrative lacks fire and energy, displaying none of the passion Beethoven poured into his work. Perhaps Zimberman should have looked more to the passion of the composer than to the notes on the page for inspiration. With that kind of power, A Late Quartet might have been something special indeed.