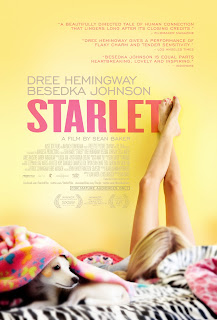 With only three feature films under his belt, Sean Baker has already established himself as one of the strongest directorial voices working in film today. Those who have seen his films can't help but fall in love with his endearing, relatable characters and his exhilarating neorealist style. The problem is that so few people have seen his films, even among film critics. It's a real shame, because it is our job as critics to recognize and spotlight talents like Baker, yet he remains mostly an unknown.

While a bigger budget would most likely dilute the shoe string budget aesthetic of Baker's work, which is one of its strongest assets in the first place, he deserves to be recognized more than he has been. And his latest film, Starlet, simply cements what a talented craftsman he really is.

In the hands of a lesser director, Starlet could have easily been a treacly mess, a sentimental feel-good pat on the back but without any real soul. That's what Baker brings to the table, a hard won sense of reality and depth that brings the film's characters to life.

Dree Hemingway, great-granddaughter of Ernest Hemingway and daughter of Mariel Hemingway, stars as Jane, a 21 year old aspiring actress who is doing porn with her troubled roommate, Melissa (Stella Maeve), and Melissa's irresponsible amateur director boyfriend, Mikey (James Ransone). After purchasing a thermos from an old woman at a yard sale, Jane discovers thousands of dollars hidden inside, and finds herself in the middle of a moral conundrum. She decides to return the money, but the old woman, Sadie (Besedka Johnson), angrily turns her away from her door without even listening to what she has to say. So Jane decides to get to know her a little better, superstitiously finding ways to cross paths with the crotchety Sadie.

Sadie at first rebuffs Jane's seemingly overbearing attempts at friendship, but eventually gives in. Jane drives her to the grocery store, accompanies her to bingo, and eventually to weekly trips to the cemetery to visit the grave of her late husband. All the while Jane continues to wrestle with (and spend), Sadie's money, a stash she didn't even know existed in the first place. But eventually their friendship transcends the original reason for their meeting, even as Sadie's life begins to deteriorate at home, her friendship with Sadie becomes something far deeper than either could have ever imagined.

It's a premise rife with potential for overstatement and schmaltz, but under Baker's steady hand it becomes something truly powerful. Baker is a kind of spiritual successor to the work of Vittorio De Sica, whose neorealist masterpieces Bicycle Thieves and Umberto D. took similarly sentimental stories and told them unblinking, naturalistic tenacity. Baker's handheld, improvisational style creates a kind of cinema verite authenticity that is hard to shake. The performances feel equally lived in - Hemingway is a star in the making and Johnson, who at 86 years old is making her acting debut after 71 years of living in Los Angeles, is a revelation. The title Starlet, surprisingly, directly refers to Jane's dog (who gives the finest canine performance since The Artist's Uggie). But it also refers to Jane as well. Jane desires something more, and what fulfillment she doesn't find in her pornographic career she finds in Sadie, to whom there is much more than meets the eye.

Baker directs with such sensitivity and grace, allowing the story to reveal itself in a disarmingly moving way. Starlet is the kind of film that sneaks up on you, taking us to surprising and unexpected places. It has the ability to explore dark places without feeling ponderous or heavy handed. It is a wholly organic experience, never overplaying its hand or pushing past the point of believability. From Take-Out, to Prince of Broadway, and now to Starlet, Sean Baker has proven himself again and again as one of cinema's most promising new talents. After three films, he's no longer just a promising talent. He's one of our most impressive independent voices. It's time for the rest of the world to sit up and take notice. Hopefully Starlet will be the film to make everyone do just that.