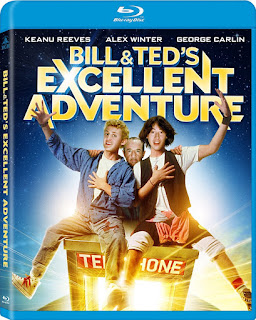 "Strange things are afoot at the Circle K."

There's just something special about Stephen Herek's endlessly charming cult classic, Bill & Ted's Excellent Adventure, that can't quite be put into words. It certainly helps to have a nostalgic connection to it, because watching it today it may come off as dated and goofy to the uninitiated  I was only two years old when it was first released in 1988, but I certainly grew up in its shadow, watching it on a rented VHS for the first time sometime in the early 90s when it was still a relevant icon in pop culture, and its 1991 sequel, Bill & Ted's Bogus Journey was a little more fresh in everyone's mind.

The original is still the standard bearer when it comes to Bill and Ted, and it has managed to endure in the public consciousness enough to inspired talk of a third film starring Keanu Reeves (Ted) and Alex Winter (Bill). 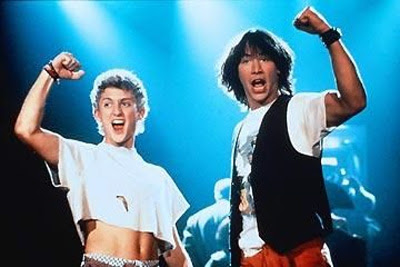 Of course, Reeves and Winter are really too old to be returning to the roles of Bill and Ted, the two airheaded "dudes" who find themselves in danger of flunking their history class because they're too busy practicing for their band, the Wyld Stallyns. But the new blu-ray release from Fox Home Entertainment reminds us all why we fell in love with these two endearing bros in the first place. It's hard to watch the film now without reflecting on what a great talent we lost when George Carlin passed away in 2008. His performance as Rufus, Bill and Ted's futuristic guide through history, is one of his most fun roles. It many ways, Bill & Ted's Excellent Adventure is the quintessential 80s sci-fi comedy, following these two lovable idiots on a journey through time as they meet such figures as Abraham Lincoln, Socrates, Napoleon, Sigmund Freud, Joan of Arc, Beethoven, Genghis Khan, and Billy the Kid, and return them to 1988 to help give a history presentation to their school.

It's an inspired bit of silliness, and one of the best of its kind. It's the kind of film that Hot Tub Time Machine attempted to pay homage to with only middling success. This is the real deal, and while Winter has all but disappeared from film and Reeves has become an object of parody all his own, they were perfect here, and remain icons of 80's film. The new blu-ray release cleans the film up nicely, and adds some special features including an interview with the inspirations for the film. Sadly we don't get to hear from Winter and Reeves, the two fans care most about, but the film looks good without sacrificing its 1980's look. Bill and Ted are back in the most excellent way possible, let's not sully it with an unnecessary sequel. Pick up the original, and party on dudes!