Review | "In Another Country" 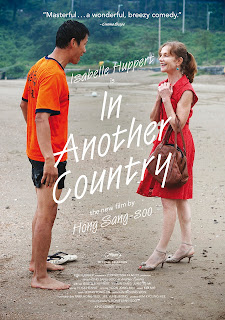 Comedy is not the first word that comes to mind when one thinks of Korean director Hong Sang-soo. He has certainly had humorous elements in films such as On the Occasion of Remembering the Turning Gate, Virgin Stripped Bare by Her Bachelors, and his most recent work, The Day He Arrives. But the films themselves can't really be classified as comedies.

His second 2012 effort, In Another Country, very much earns that label. It is unmistakably a Hong work, bearing his own unique auteurist stamp, but it puts a different kind of spin on his favorite themes and techniques.

Hong has always been fascinated by elliptical narratives and cyclical storytelling, and has explored them time and time again throughout his career. He does so again here, but with a decidedly more comedic bent, highlighting not only the absurdity of the situation he presents but also its inherent universality, finding humor in the day to day mundanity that makes the world go round.

The old rule of theatre is that comedy comes in threes. In keeping with that tradition, the always luminous Isabelle Huppert stars as three different women (all named Anne), who visit the same Korean bed & breakfast for vastly different reasons. The first Anne is a French filmmaker who had a previous fling with the proprietor of the bed & breakfast, unbeknownst to his pregnant wife. The second is a woman having an affair with a Korean professor, and is on an illicit getaway to see him while her husband is away on business. The third is a French professor travelling with a friend, whose husband left her for a Korean woman leaving behind a general mistrust of Korean women in general.

All three women share similar experiences, but never coexist within the same segment of the film. Each one meets the same charismatic young lifeguard, who becomes hopelessly enamored with the first Anne, mostly indifferent to the second, and romantically involved with the third. Are they all versions of the same person, each a kind of parallel universe echo of the other? A kind of 'what if' scenario based on small variations? Or are they simply three women visiting the same place at different times? These are questions that Hong never answers, and he does so with clear intent.

One gets a feeling of deja-vu watching In Another Country, as the stories begin to overlap and repeat themselves. Hong essentially tells the same story three different times, but each time with a different result. The makers of Cloud Atlas would have been smart to study Hong's mastery of such overlapping narratives, because even though they are edited linearly, no one does it quite like Hong. There is a sort of distance to his intellectual exercises, but the constant repetition of the stories is used for a more comedic tone here than in his previous works. The three Annes represent three totally different people sharing similar experiences in a foreign land, evoking a kind of celebration of shared experiences and escape from the endless loops of life. When one of them exits, another takes the stage, and so the cycle continues.

That's one of the most fascinating aspects of Hong's films - their ability to grow in retrospect and reveal their treasures slowly. In Another Country, his first English language film, may not be as complex as some of his previous films (or as personal as The Day He Arrives), but it's a charming and entertaining work. Hong fiddles with some of his favorite narrative experiments and turns them into something we haven't seen from him before. In Another Country is a lovely and engaging look at people whose own lives have become prisons who find love and redemption through shared experiences in a foreign land, as well as one of Hong's most joyous and purely entertaining films.