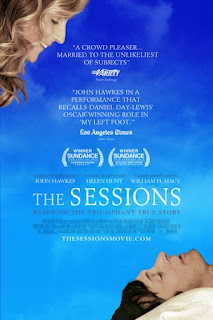 The Sessions might as well be subtitled: John Hawkes really, really wants an Oscar.

That's not to say that Hawkes isn't good in the film, but as Mark O'Brien, a paralyzed poet who is unable to move anything from the neck down, he seems (literally) trapped in a role that is tailor made as a valentine to Academy voters.

Then comes the twist - O'Brien isn't out to change the world. He isn't heroically trying to overcome his illness or so something great with his life. He just wants to have sex before he dies.

So he turns to his priest (William H. Macy), who concludes that God will look the other way just this once, leading O'Brien to seek out a sex surrogate since his he has had little luck in finding any kind of real romantic connection with a woman - his one rebuffed attempt left him heartbroken and in need of a new attendant.


His new caretaker, along with some of his more sexually liberated friends, help set him up with a sex therapist named Cheryl (Helen Hunt). Cheryl lays down the rules very quickly - she is not a prostitute, her sexual therapy is meant only as a learning tool for future partners (no romantic connections), and they are limited to six sessions together. As a 36 year old virgin who has never known the touch of his own hand, let alone a woman's, he finds it hard to control himself at first, but each session leads him closer to his ultimate goal. Along the way, however, he begins to have feelings for the married Cheryl, complicating what was once a very straightforward professional relationship.

It's all based on a true story, as O'Brien wrote it in his article "On Seeing a Sex Surrogate." The film, however, feels like someone watched The Diving Bell and the Butterfly and misinterpreted it as a comedy. Other than Hawkes and Hunt, the characters around them seem to be paint-by-numbers filler. Hawkes is limited, of course, by the very nature of his role, but the film around him just rings false. There's just not enough here for a film, so writer/director Ben Lewin inserts a lot of filler with O'Brien's X-rated confessions to Macy's Father Brendan.


The real highlight here is Helen Hunt, whose performance as Cheryl feels like the only part of the film with any truth in it. It's become a cliche to refer to any performance by an A-list actress that features nudity to be
"fearless," but Hunt truly is. She has never seemed so confident, so fresh, and so effortlessly sexy as she does here. It's a terrific turn in a film that otherwise seems lost. Is it a sex comedy? Is it an inspiring tale of overcoming adversity? In the end it's a strange mix of both. The Sessions is occasionally charming, but mostly it's just awkward, and not just because of the subject matter. It feels stagnant and hackneyed, and undeveloped anecdote rather than a fully realized film.

That's not really surprising given that it's based on an article. Not a novel. An article. And Lewin has to do some narrative acrobatics in order to stretch this into a feature length film. Perhaps it would have made a better short film. Paring away all the filler might have made for a more streamlined experience, because outside of Hawkes and Hunt, it really doesn't know what to do with itself. It's a muddled, scattershot film of hollow platitudes anchored by two exceptional performances. See it for Hawkes, but stay for Hunt. It's been too long since we've seen her on screen in a role this good, and she single-handedly buoys an otherwise bland film. Make no mistake, The Sessions may be Hawkes' showcase, but it's Hunt's show all the way.